Throughout ArtPrize 2015, critics have remarked on the noticeable increase in the quality of entries in the seventh iteration of the radically open international art competition. After this evening’s ArtPrize Awards, it’s clear that Kendall College of Art and Design of Ferris State University (KCAD) has played a key role in the event’s evolution.

KCAD’s ArtPrize 2015 exhibition, “Sightlines,” landed in the winners’ circle, with Julie Green’s “The Last Supper” winning the Juried Award in the 3D category and Prince Thomas’ “That Was Then” taking top Juried honors in the Time-Based category. Both artists are first-time participants in ArtPrize.

A vast work, both in terms of size and subject matter, “The Last Supper” consists of 600 plates upon which Green has immortalized the last meals of executed inmates from around the United States, each accompanied by a description of the meal request, date, and state—but no more.

"The Last Supper" by Julie Green, winner of the Juried 3D Award

3D juror Sarah Urist Green praised the Green’s use of narrative, saying, “The artist chose to display just the right amount of info; she chose not to include the names of the inmates, just the meals, what they deiced to eat during their last hours. It’s very easy to dehumanize the people behind the plates, but the piece really humanizes those inmates and gets to the core of the issue and what is at stake.”

Thomas’ immersive “That Was Then” combines the actual audio from CNN’s reporting of the first hours of Operation Desert Storm with video footage of a Fourth of July fireworks display to comment on the close link between the past and present.

"That Was Then" by Prince Thomas, winner of the Juried Time-Based Award

Time-Based juror Shari Frilot, Los Angeles-based Senior Programmer of Sundance Film Festival and Curator of New Frontier at Sundance, pointed to the deceptive simplicity of Thomas’ piece, saying “It’s a simple juxtaposition of a fireworks show and the CNN coverage of the first gulf war attack, but as the piece goes on it expresses how war is narrativized, not only in contemporary warfare but in the way we celebrate war. The piece links its critique and message to something that we kind of universally relate to in America - because we’ve experienced it.”

Thomas' video piece was an immersive experience for ArtPrize viewers

Born in Kuwait, naturalized in the US, and raised primarily between India and the United States, Prince Varughese Thomas has always felt outside the dominant culture in which he exists. Speaking to the media, he said he was humbled by the attention his piece has received.

“When they called my name it was a shock, and incredibly humbling at the same time because there’s incredible works out there; to be honored among them is wonderful.”

Thomas posing with his award backstage at the Civic Theatre

He also praised ArtPrize for its ability to engage a diverse audience. “For myself as a socially engaged artist, it was very interesting to me that an organization was attempting to make a closed system a little more open, a little more democratic. You guys have such a broad range of artists showing, and there’s a beauty in that. There’s a beauty in that the art world can be so accommodating to so many.”

KCAD President Leslie Bellavance commended the KCAD Exhibitions staff for it’s work on “Sightlines,” saying, "Congratulations to our Curator of Exhibitions, Michele Bosak, and to all of our Exhibitions staff on their well-deserved success. In "Sightlines," they've created an experience that is equal parts accessible and intellectually challenging. This award is yet another indicator of the high standard The Fed Galleries @ KCAD continues to set with all of its year-round programming."

KCAD connections cropped up elsewhere in the winners’ circle as well. SiTE:LAB, an organization for which KCAD alumnus Tom Clinton (’02, Printmaking) serves as exhibitions director, enjoyed a big night. Juried Grand Prize winner Kate Gilmore, whose “Higher Ground” was a part of SiTE:LAB’s ambitious Rumsey Street Project, had her worked praised as the “most ambitious piece in all of ArtPrize” by Grand Prize jurors.

“SiTE:LAB took the question of what is an outstanding venue to another level. They went outside of a venue and turned the space, the site, the buildings, the people, the community, everything into an active participant in the larger project,” said Outstanding Venue juror Steven Matijcio. “It’s incredibly inspiring to see what they have done; they’re making place and drawing people in a space and allowing that best venue category to become something much larger and much more expansive.”

For Bellavance, who took office this past July, the night was a memorable conclusion to her first ArtPrize experience.

“In just two days I will have completed my first experience of ArtPrize. This event, with a decidedly Grand Rapidian flavor, has been described as the largest public art event, as unorthodox, carnivalesque, unprecedented, and emotionally intense. Is there just one ArtPrize? Or, as has been my experience, are there many ArtPrizes? It is too complex and too intricate to be encompassed by a single definition. It is a multiplex,” she told the crowd in introducing the Juried Grand Prize. 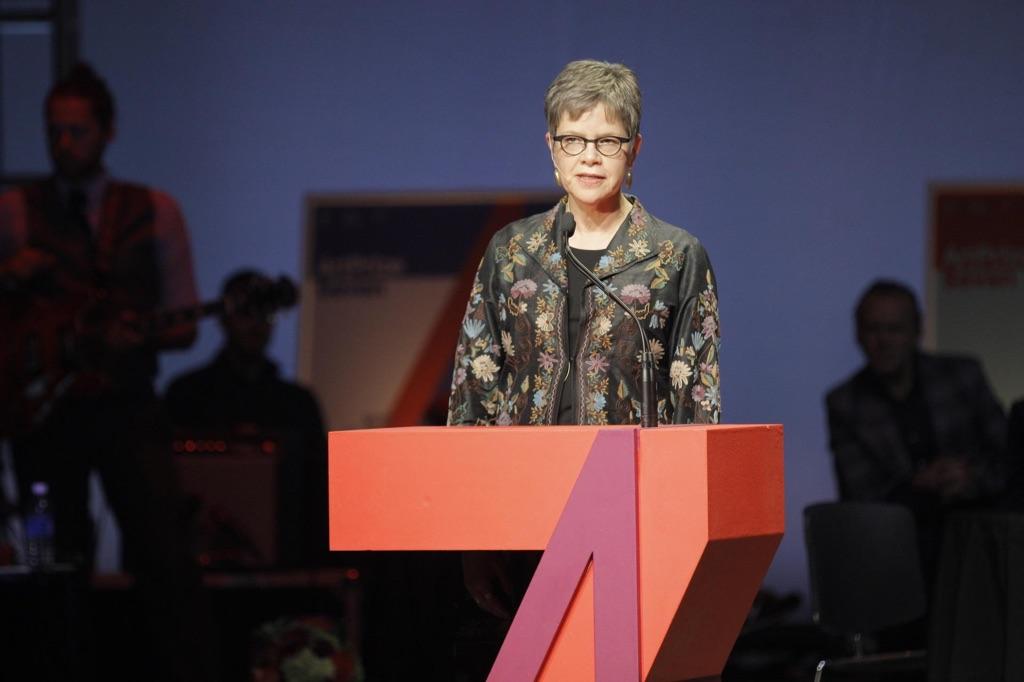 Bellavance addressing the crowd at the ArtPrize awards

“The fact is, it’s not so much what ArtPrize is, but what it does. ArtPrize brings the discourse and judgment of art into a civic space. It engenders a critique culture that encourages critical thinking. Each time a viewer regards, comments, debates, or critiques a work of art they internalize the imaginative impulse and reenact the creative process in a new and personal way.”


Here’s a complete breakdown of the winners of ArtPrize 2015:

- Time-Based: "That Was Then" by Prince Thomas

- Installation: : "In Our Element" by Rueben Ubiera