Huge congratulations are in order for recent KCAD Graphic Design graduate (Spring 2021) Kelsey Cunningham, winner of a coveted Gold ADDY Award at the national level of the American Advertising Awards for her Windex outdoor billboard design. Apart from her winning billboard design, Cunningham’s entire integrated Windex campaign is top to bottom innovative and connected by the concept of clarity.

Of her win, Cunningham says “It still feels like a fever dream. Coming to nationals and representing my school, which I truly love so much, that makes me incredibly happy.”

Cunningham’s win continues a national-level winning streak for KCAD’s Graphic Design program. Since 2006, students in the program have routinely earned a place in the national spotlight, with two Gold ADDY Awards going to 2020 grads Jinyu He and Caitlyn Straley just last year. In the past 15 years alone, 13 KCAD students have brought ADDY awards at the national level.

“Kelsey infuses her own personal brand of enthusiasm and energy into her professional work, with an overflowing sketchbook of ideas and information that gets funneled down, after much deliberation and feedback, to the concept that will resonate most with the audience,” says Professor and Graphic Design Program Chair Angela Dow. “Her winning Windex ad and the rest of her ingeniously clever campaign is the perfect example of the kind of smart, relevant, strategic communication design that the Graphic Design program instills in our students.”

As the centerpiece (and winning piece) of Cunningham’s integrated Windex campaign, the billboard design features a large squeegee “wiping away” the white of the billboard to reveal the clear sky behind. The clever tagline “Made to be Unseen” ties the entire concept together effortlessly and makes a bold statement about the product’s cleaning power. The squeegee’s handle become part of the billboard, merging with the vertical base of the billboard to create a seamless and attention-grabbing aesthetic. 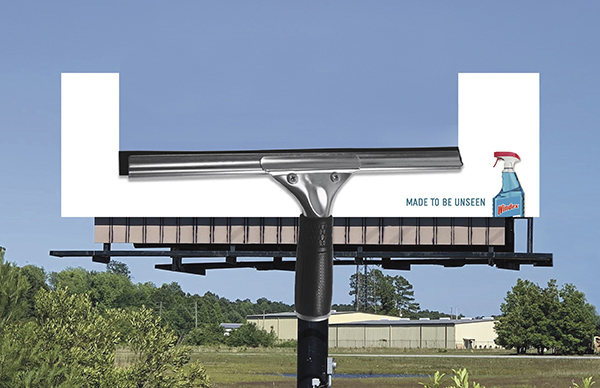 Windex billboard design by 2021 KCAD Graphic Design graduate Kelsey Cunningham, winner of a Gold ADDY Award at the National level of the American Advertising Awards (image courtesy of the designer)

This concept of radical clarity didn’t come out of thin air, however. The process of creating an engaging ad for Cunningham—and every student in the Graphic Design program—starts with identifying a target market.

“When I think of a cleaning product the stereotypical target is stay-at-home moms, but I wanted to take a different route,” she says. “I wanted to flip it and target stay at-home-dads.”

During the concepting phase of the design process, students at KCAD are taught to develop one single specific customer archetype to communicate with, going so far as to assign the fictitious person attributes, beliefs, personality traits, and even a name.

“While your ad might end up speaking large groups of people, you really want to hone in on one person … as long as they would get it, that’s what matters,” Cunningham says.

This is where the concepting process truly takes off.

“It started with that idea of cleaning things so well, you can’t even see them. It progressed and I got some feedback from some people in my class and from there it continued to progress, and I came to this idea of a squeegee and literally wiping away the board behind it,” she says. “After that it was a lot of image compiling and photoshop work.” 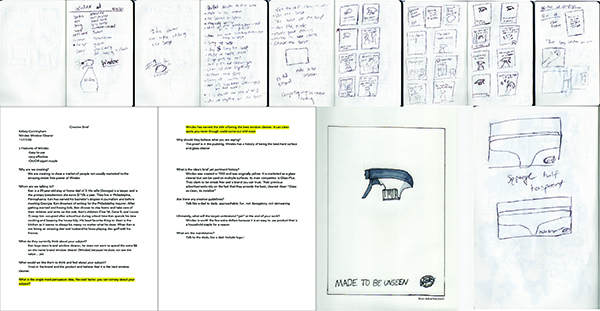 (above and below): a look inside Cunningham's process—including detailed profiles of specific customer archetypes—that brought her award-winning design to life (images courtesy of the designer) 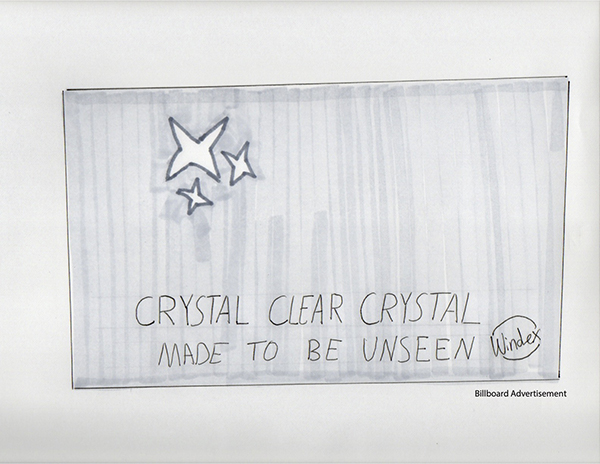 Cunningham’s concept carries through the rest of her Windex campaign, which includes a magazine single page print ad, a magazine spread print ad, and an Instagram ad. Her spread ad shows only the nozzle of the Windex bottle, against the signature Windex blue background, giving the impression the bottle has disappeared. Her Instagram ad integrates movement into the campaign, starting with just a white square, the tagline, and a Windex bottle before “wiping away” the white screen so well that it disappears to reveal the inside of a phone. Just as innovative is the single page ad, which is printed on clear material and designed to disrupt the viewer as they flip through a magazine.

“I thought how cool would it be if in a magazine, there isn’t paper, it’s just clear and just the tagline and the product, “Cunningham says. “It just came to me out of the blue and I fell in love with the idea.” 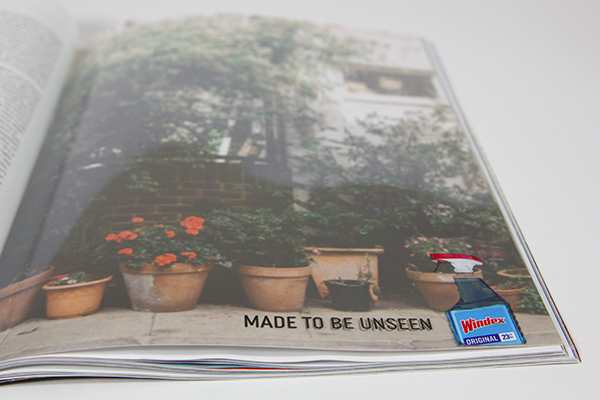 (above and below): Building on her billboard design concept, Cunningahm's ingenious print ad makes use of a firm yet flexible clear acrylic insert to emphasize the cleaning power of Windex while giving the ad a tactile feel and disruptive presence sure to capture readers' attention (images courtesy of the designer) 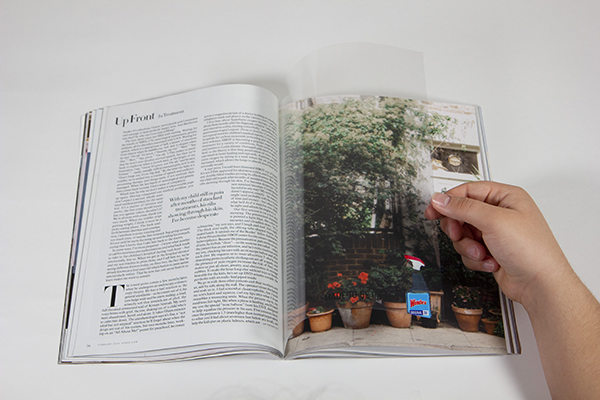 Disruption—and a refreshing simplicity—is key to Cunningham’s campaign, which seeks to stand out in the busy visual world we live in. And for the glass cleaner it advertises, the concept of clarity hits home and leaves a lasting impression on the consumer.

Cunningham’s credits her experiences in the Graphic Design program with paving the way for her creative growth and this ADDY success. From professors encouraging her to dive deep into briefs and sketch countless thumbnails to that way in which the environment of the program encourages peer reviews and collaboration, she found the support structure and experiential learning opportunities she needed to be able to elevate her ideas into artful visual communication. 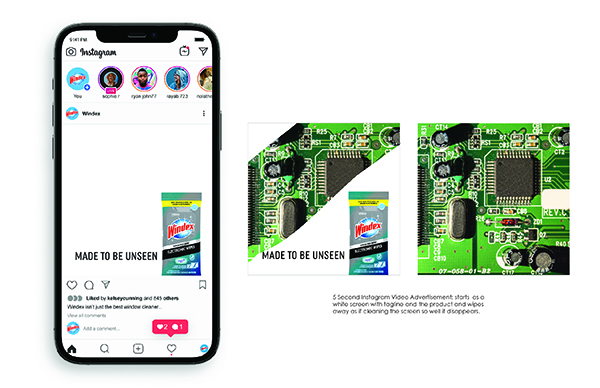 (above and below): Rounding out Cunningham's clever Windex campaign are a Instagram video ad and a print ad 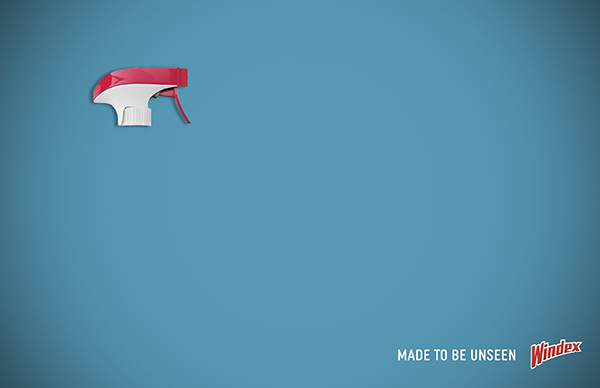 “Every single professor that I have had at Kendall has been so incredibly kind and encouraging and I truthfully don’t know what I would do without them,” she says. “Having professors who have industry experience and are able to tell you things and have insights has already made my life trying to find a job ten times easier. I know what to look for, I know what to avoid, and I wouldn’t have that knowledge if it wasn’t for them and their amazing expertise.”

It wasn’t just Cunningham’s faculty who made a difference though; the community at KCAD was also invaluable.

“Having a community of creatives who are also after the same goals and missions as you is amazing, because we’re all in that creative headspace and we’re all there and we all want to do awesome work,” she says. “That’s something that I don’t think I would have been able to find anywhere else.”

Big picture, Cunningham is looking to follow in the footsteps of the professors who shaped her college experience and career path, saying she eventually wants to go back and get her masters and teach.

But first, she wants to dig into the industry and learn all she can about the graphic design field first.

“I understand the best professors have industry experience, and I’m looking at agency experience to really understand the industry so at some point I will be able to put that knowledge back onto young people like me. That’s been the goal for a few years and now I’m just trying to figure out how to get there.”