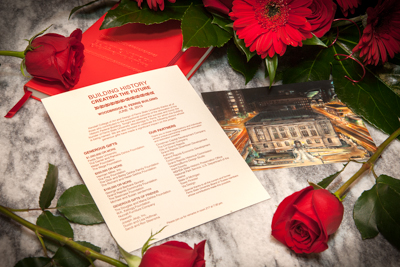 Guests dressed in touches of vivid red, Michigan food and wine, and a painting of the historic Federal Building at night by graduate student Hallie LeBlanc were highlights of the building’s official grand opening by Ferris State University and Kendall College of Art and Design on Tuesday, June 18. Ferris’ President Dr. David L. Eisler formally announced the naming of the building as the Woodbridge N. Ferris Building, in honor of the former Michigan governor, United States Senator, and founder of Ferris State University.

One hundred and fifty guests gathered for the reception and strolling dinner that also included recognition of key Woodbridge N. Ferris Building donors and partners, and an exclusive exhibition preview of “Contemporaries, Then and Now: The Gordon Collection and West Michigan Painters.” 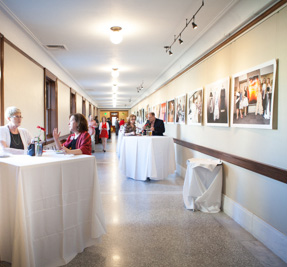 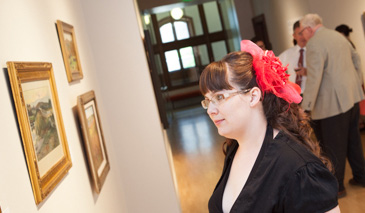 “We are so proud of this beautiful building as a vibrant symbol of art design, preserving the past, a bright economic future, especially for its students, and as a modern resource for the Grand Rapids community,” Eisler said. “We couldn’t be more proud or appreciative of the truly creative solutions that it represents to a vision shared by many. Ferris has no other building named for its founder, which we think says it all.”

“This building is now filled with the essence of true collaborative design, which is people solving difficult challenges together creatively using design methodology,” Kendall President David M. Rosen said. “It’s a very fitting metaphor for how the project came to be, with so many contributors bringing their best efforts together.” 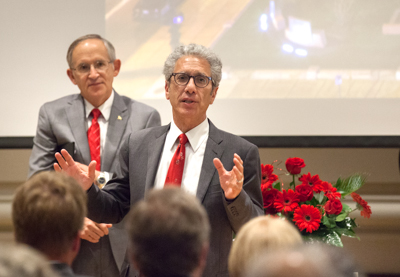 The event recognized the generous gifts of many donors and key partners, without whom this beautiful restoration and renovation would not have been possible.

Among the partners recognized at the event were organizations that contributed to the project, including the City of Grand Rapids, the Michigan State Historic Preservation office, Michigan Economic Development Corporation, the National Park Service, project developer and construction manager The Christman Company, and architect of record Tower Pinkster, historic preservation consultants Hopkins Burns Design Studio, and interiors and furniture designers Via Design.

The historic five-story Beaux Arts building, now part of the Kendall campus, was constructed in 1909. It was added to the National Register of Historic Places in 1974 and served as a federal building until 1981. At that time, the City of Grand Rapids renovated the first three floors of the building for the Grand Rapids Art Museum. Following the move of the museum in 2007, the building sat vacant until Ferris chose to redevelop the building to provide additional space for Kendall. The formation of a public/private partnership assisted Ferris in its plan to redevelop and adaptively reuse all five of the floors in accordance with federal and state preservation standards. The fully restored and renovated building provides a cultural/arts center for Kendall and includes an auditorium, materials library, art exhibition galleries, cafe, classroom space, student workshops and more. Additionally, the innovative Wege Center for Sustainable Design was incorporated on the fourth floor. The building has garnered multiple industry awards, including the Governor’s Award for Historic Preservation and the Michigan Historic Preservation Network award, as well as LEED Gold Certification by the U.S. Green Building Council.