The power of an idea is amplified when it enters a room abuzz with possibility.

Eight Kendall College of Art & Design students were among the 130 people who entered the room for the 4th Annual Startup Weekend Friday afternoon at The Factory, a shared learning and work environment at 38 Fulton Street.

Thirty-five people pitched ideas and teams were formed around the final 10 that were decided upon by popular vote.

Bestowing the virtues of entrepreneurship on young creatives who may be awash in good ideas but a bit shy on just how to bring them to market are Industrial Design assistant professor Jon Moroney and his colleagues.

Moroney guided the Kendall students, joined by a GVSU MBA student, through the weekend to produce a prototype for U-Turn, the rare physical product turned out by Startup Weekend.  The program, which originated in Seattle and has gone global, typically generates ideas for web apps and other electronic solutions. 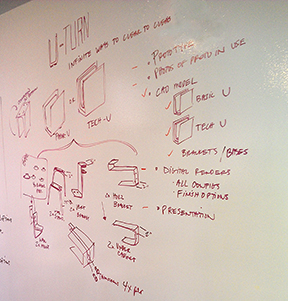 Moroney’s students turned that notion on its head, realizing we may be highly digitized but, inevitably, some paper remains – and their concept, U-Turn, is the ideal, simple, stylish and versatile little holder for papers, files, notebooks or, on the occasion you fold it closed, a laptop.

Spirited by bent wood and steel, The Eameses would be proud.

“We had a lot of people ask us questions, and it was those conversations that opened our eyes and changed our perspective on what the value of our concept was, and enabled us to decide on a consistent story we could tell,” industrial design student Joe Parr said.

It was that community energy, Parr added, that urged on the team’s creative and entrepreneurial push.

Kendall President Dr. David Rosen advocates for just this sort of experience in business for art and design students.

“Artists and designers in all fields want to help people see, feel, and do things that they did not know they were capable of feeling. Entrepreneurship starts from the same premise,” Rosen said. “When I look at the entrepreneurs of this world, more and more of them are coming from art and design.  And I am not surprised.”

Aaron Schaap is founder of The Factory and organizer for Startup Weekend in Grand Rapids.

“The Kendall team listened to their customers and landed on additional solutions,” Schaap said of the U-Turn. “It could have remained a great looking little magazine rack, but that wouldn’t have been enough. The add-ons allow you to hang it or mount it on a wall in a way that really adds value. You can put a lamp on it – It’s that versatility that makes the product what it is.” 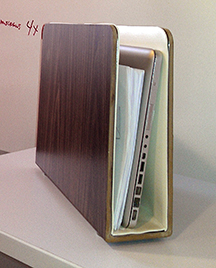 Moroney said he and the Entrepreneurship in Design students will discuss the potential outcomes for U-Turn in the weeks ahead. In the meantime, he is encouraged by the intensity he saw throughout the weekend.

“The students were really surprised by how much they were able to accomplish in such a short time,” Moroney said . “It’s important to be able to avoid getting hung up and just make decisions and move forward.  And they won.”