Brian Craig isn’t much for waxing poetic about the past. Despite being well into the 40th year of an extraordinary career as an architect and educator, the Director of Kendall College of Art and Design of Ferris State University's (KCAD) burgeoning Master of Architecture (MArch) program remains firmly focused on the future.

Still, when you’ve accomplished what Craig has, a little nostalgia never hurts. At the recent American Institute of Architects (AIA) Grand Rapids Honor Awards Gala, surrounded by friends, family, and colleagues, Craig received a Lifetime Achievement Award for his immense contributions to both the field of architecture and to the community of West Michigan.

“It’s an incredible feeling to be honored like this,” says Craig. “I’ve always been someone who keeps pushing forward and doesn’t rest too much on laurels, but when I stop and think about everything I’ve had the opportunity to be a part of these last 40 years, it’s very special.”

The Lifetime Achievement Award is not given annually, but rather is reserved for individuals who have come to embody the profession’s social power. In a recommendation letter to AIA Grand Rapids, TMP Architecture President Timothy Casai, FAIA, pointed to collaboration and community engagement as the foundation of Craig’s career.

“Not only does Brian exemplify the best in architectural practice, but his deep commitment to bringing design to his community and to the world is executed in a sensitive and highly ethical manner,” Casai wrote. “His enviable skills with design and planning that enhance architecture and design make him a sought after design team partner; one who not only understands the collaborative design process, but who practices it at a high level.”

Upon graduating with distinction from the University of Michigan’s Master of Architecture program in 1975, Craig immediately volunteered for the Peace Corps. He was sent to Kabul University in Afghanistan, where he taught architecture classes and designed and built what was believed to be the country’s first residential solar water heater. Out of the Peace Corps, he took a teaching job at the University of Notre Dame, where he remained for the next two years. 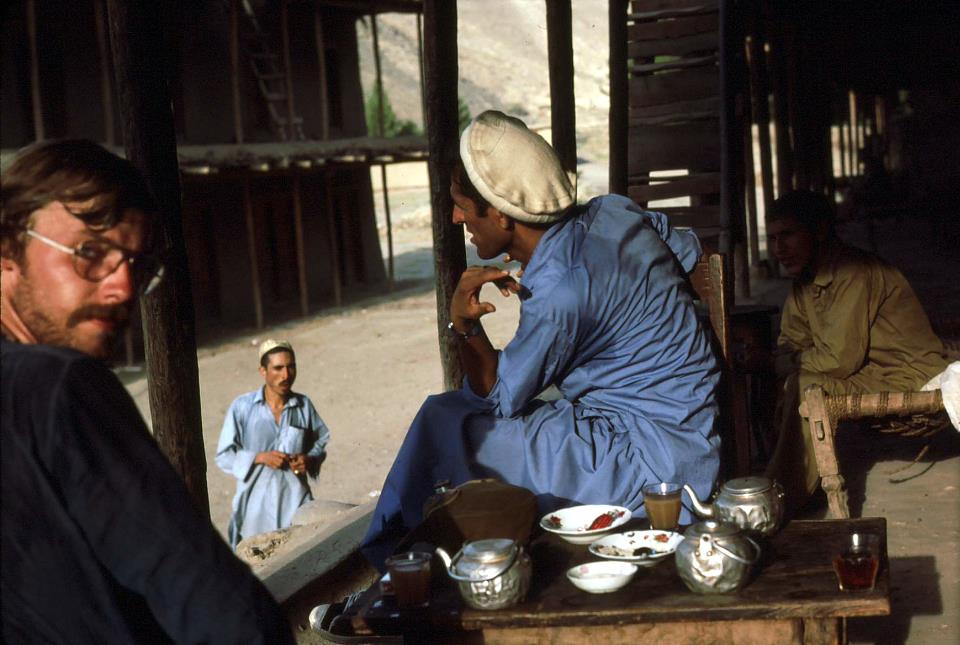 Craig (left) in Afghanistan during his time in the Peace Corps

From there, Craig would make his first foray into professional practice. Following stints with South Bend, IN-based firm Crumlish/Sporleder and Associates and Grand Rapids-based firm Daverman Associates, Inc, where he managed the firm’s office in Saudi Arabia, Craig joined Grand Rapids-based firm Progressive AE in 1986. It was at Progressive AE that Craig truly cemented himself as not just a highly skilled architect, but as a force for community building as well.

Kathleen Ponitz, who worked with Craig at Progressive AE, also nominated him for the Lifetime Achievement Award. “Having worked with many architects over 30 years, I have discovered that architects tend to focus on one or more of the following aspects of the profession: design, education, management, leadership, and/or the professional practice of the firm. Some architects are locally or regionally based while others are nationally or globally centered. Brian stands out because he has succeeded in all the aspects of professional practice and has served at a local, regional, state, national and global level,” she wrote. “His goals have always been to ‘do all things right’ – design, leadership, and place making – while also ‘doing the right thing.’”

After leaving Progressive AE in 2007, Craig worked as a professional consultant for a few years before returning to education. In 2010, he was tapped by Ferris State University to be the first permanent Director of its School of the Built Environment.  While there he helped to found the school’s BS degree in Architecture and Sustainability. He also fostered partnerships with other institutions and communities through encouraging projects like the Small Town Studio, which works with rural Michigan communities to bring architectural design thinking to areas where it might otherwise not be available.

From Ferris, Craig would go on to found the KCAD MArch, the first graduate architecture program to be offered in West Michigan. Now in its second year, the program is intensely focused on placemaking, with an innovative curriculum that balances foundational content, rigorous studio work, and immersive community engagement. 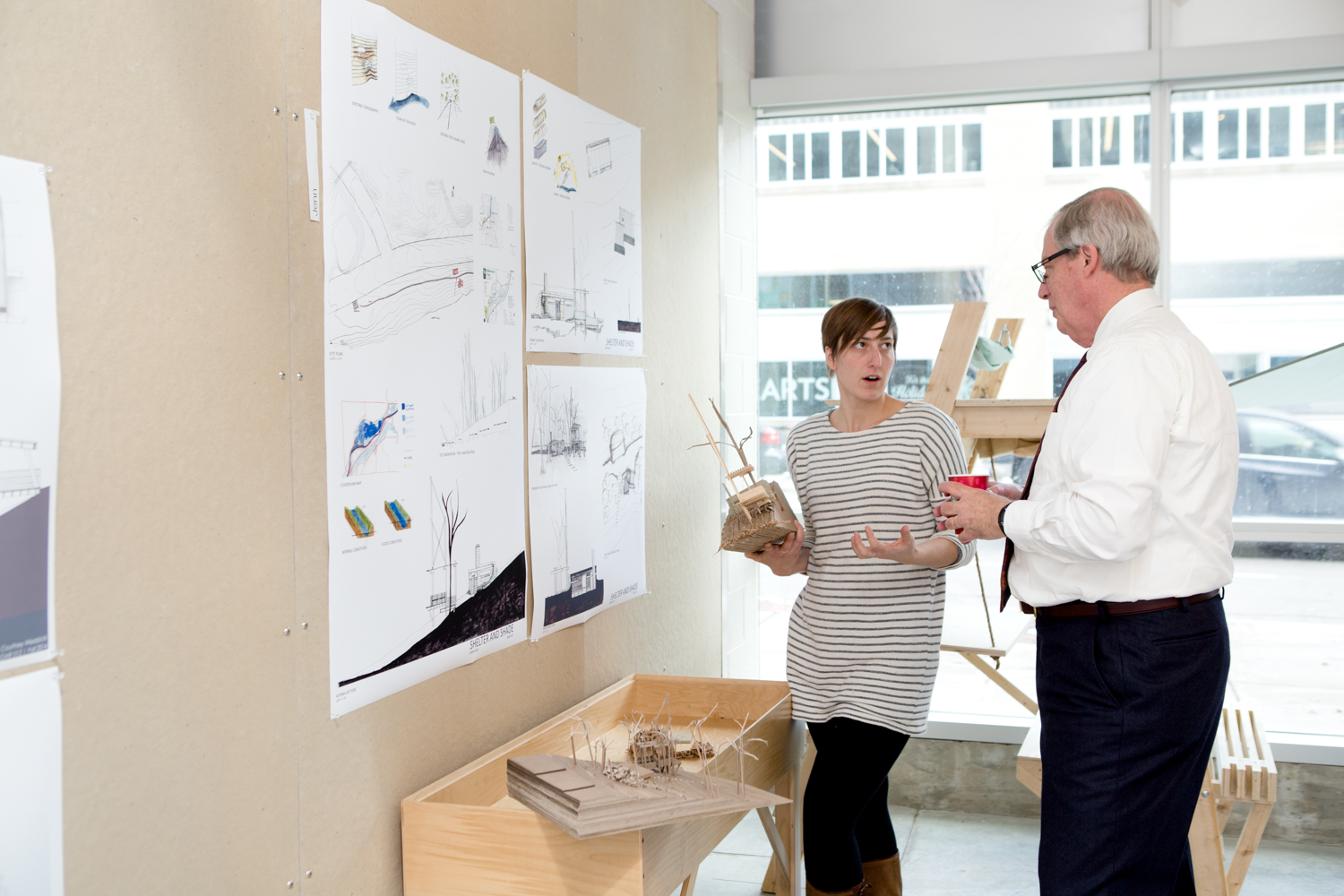 Craig mentoring a student in the KCAD MArch studios

"Brian Craig understands the ways in which architecture can be a catalyst for community building, place-making, and positive social change," said KCAD President Leslie Bellavance. “We congratulate him on this important recognition.”

Interim Dean of the College Ron Riksen added, “Brian has proven himself to be a forward-thinking leader capable of translating his broad knowledge and extensive experience into innovative curriculum design. We are proud to count him among our faculty.”

Throughout his career, Craig has also been active in West Michigan as a volunteer. Among many commitments, he served on the Grand Rapids Public Schools (GRPS) Board of Education for six years, two as President, was a part of the GRPS Student Advancement Foundation’s Executive Committee for five years, and worked with KCAD to establish a pipeline project with the National Organization of Minority Architects (NOMA) that exposes minority middle and high school students to the profession of architecture at a young age.

“Whether it’s teaching, professional practice, or volunteer work, this thread of community building runs through my entire career,” says Craig. “I am a firm believer in the transformative power of architecture, not just in relation to the built environment, but to the people who inhabit it.  We rise to the expectations with which our environment presents us. That happens best in design when we take a human-centered approach and make both the practice of architecture and the profession itself as inclusive as possible.”

All awards and honors aside, Craig continues to fulfill that same mission with the KCAD MArch, guiding a cohort of students that he says have already developed a positive and powerful culture within the program.

“The best part is that my students are celebrating with me, and that’s what really makes this award important to me,” he says. “I want to give all of our students something to aspire to by helping them understand the value of optimism and curiosity and showing them the power of individuals to make a difference. As cliché as it might sound, architecture is about leaving the world a better place than we found it – it’s really that simple.”