With the 2014-2015 academic year in full swing, it’s back to the usual business of teaching, learning, and creating for everyone in the KCAD community. But for David Greenwood, the beginning of this semester marked a radical departure from the norm.

After more than 30 years of teaching Sculpture and Functional Art at KCAD, Greenwood announced his retirement this past spring. At commencement, he was honored with the title of Professor Emeritus, and near the end of August, as his former colleagues and their students headed back to campus, he sat at home and tried to wrap his mind around post-teaching life. Becoming a full-time sculptor certainly had its allure, but compared to teaching, it can be a lonely business. 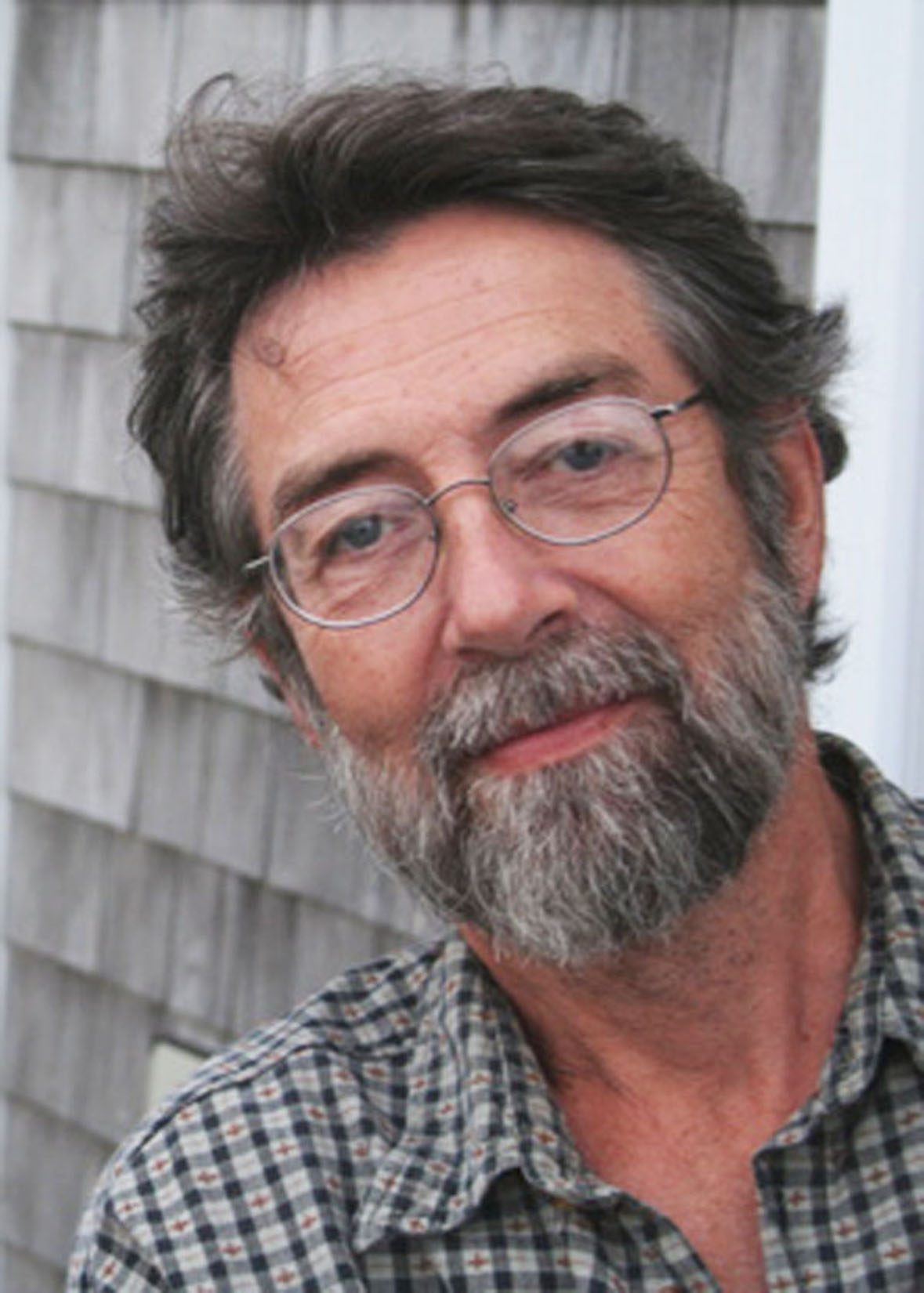 “It’s a very strange feeling,” Greenwood said of his transition. “It’s like your whole body has this seasonal rhythm, so not going back in the fall is very different for me. I know I’m going to miss my classroom and my students.”

The KCAD community will, in turn, miss a man who has been instrumental to the college’s development and impact over the last three decades. Consider this: when Greenwood was first hired at KCAD in 1982, the college, then the Kendall School of Design, was located in two small buildings north of downtown at the corner of Leonard and College and served around 500 students.

KCAD's old location on College Ave circa 1961, the year the college, known then as the Kendall School of Design, moved to that location

After he was hired, he had to wait a year for a teaching position to open up. In the meantime, he worked as an admissions recruiter, a position that required him to learn about not only the history of the institution, but also the ins-and-outs of all of the different fine art and design disciplines that were taught.

Though he’d already had considerable experience as a practicing artist and an art educator who’d taught at Hope College for eight years, Greenwood had been away from art for some time when he was hired at KCAD, having stepped away to get a Masters degree in Blind Rehabilitation and work at Community Mental Health upon graduation. 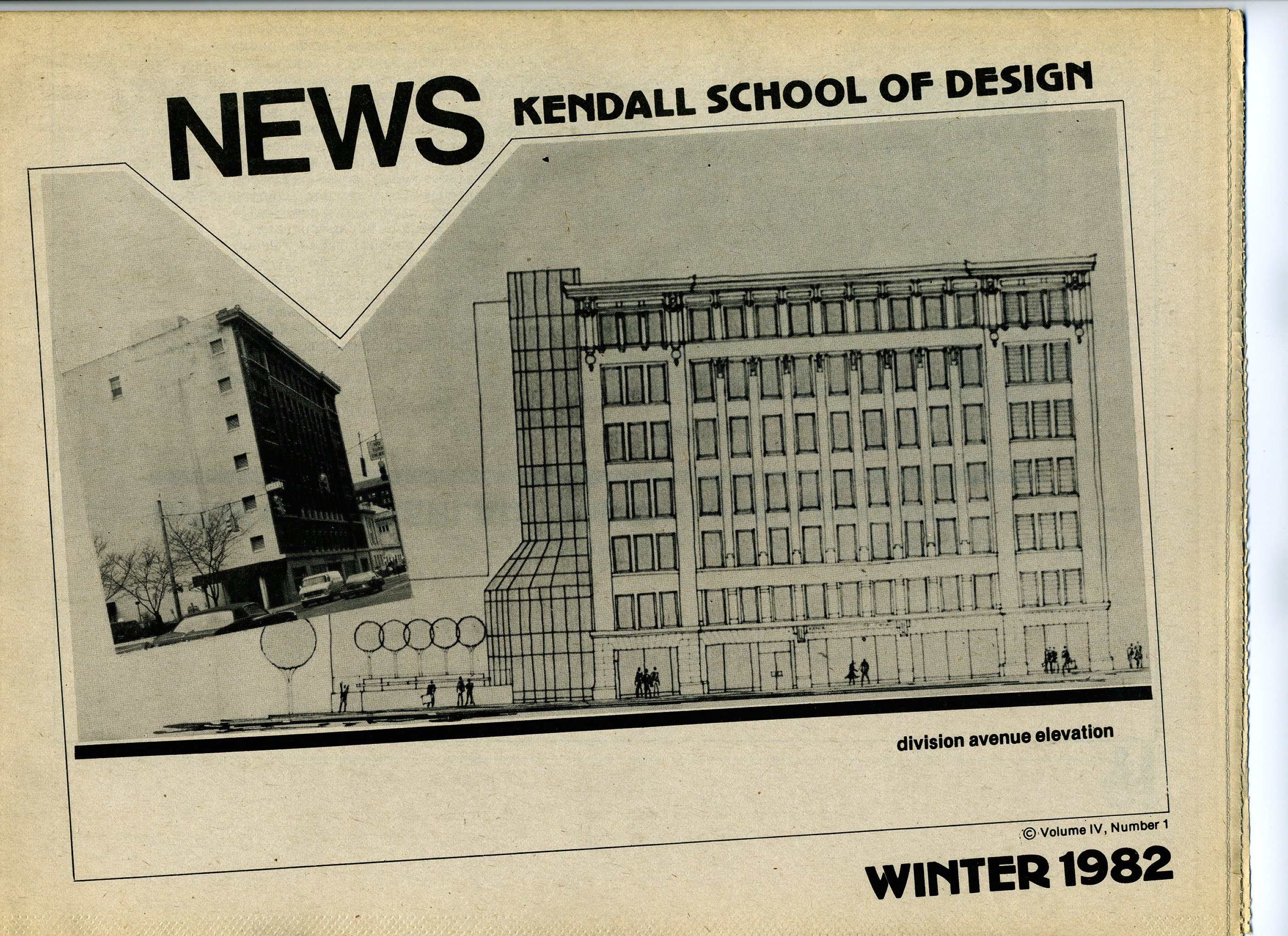 The college's newsletter, circa 1982, the year Greenwood was hired. It showcases the Manufacturers Building in downtown Grand Rapids, which the college purchased in 1981 and moved into in 1984. It remains the main campus building of KCAD today.

“I had been out of college teaching for three years, and during that time I got almost no art made, because nobody around me cared,” Greenwood recalled. “I was surrounded by psychologists and therapists. I made a few pieces of furniture and that was it.”

But once at KCAD, he felt compelled to return to his creative roots. “I was grateful to get back into an art school environment where I had colleagues that were excited about art and would inspire me to get back to work, which is exactly what happened,” he said.

Greenwood posing with his piece entitled "Slice of Life"

Much of Greenwood’s early work was in ceramics, and he later broadened his practice to include bronze casting, wood and mixed media, and performance art. Over the years, he’s carved out a distinct and successful artistic career exhibiting widely in the United States and abroad, including a solo show at the Museum of Modern Art in Dubrovnik, Croatia and a performance art piece at the Museum of Modern Art in Paris.

Greenwood posing with his piece, "Fallen Comrade," which is permeneatly located at the Michigan Legacy Art Park in Thompsonville, MI

While working as an admissions recruiter, Greenwood’s professional experience resulted in his being tasked with creating KCAD’s first internal gallery. “They just turned over a classroom to me and asked, ‘what can you do to make this look like a gallery?’ he recalled. “My attitude was ‘go!’ You asked me what I could do and I’d say ‘anything, tell me what you want.’”

"Passing Through" - one of Greenwood's pieces that combines sculpture, functional art, and performance art

As the years went by, Greenwood grew, as did Sculpture and Functional Art at KCAD, through experiences that rewarded curiosity and encouraged exploration and experimentation. While teaching in England on a yearlong Fulbright grant, he was exposed to a much different master and apprentice style of teaching art that he brought back into his classes at KCAD. During another Fulbright grant-funded artist residency in Yugoslavia, the cultural immersion further solidified Greenwood’s fascination with folk art as a human expression, something he often explores in his own work. 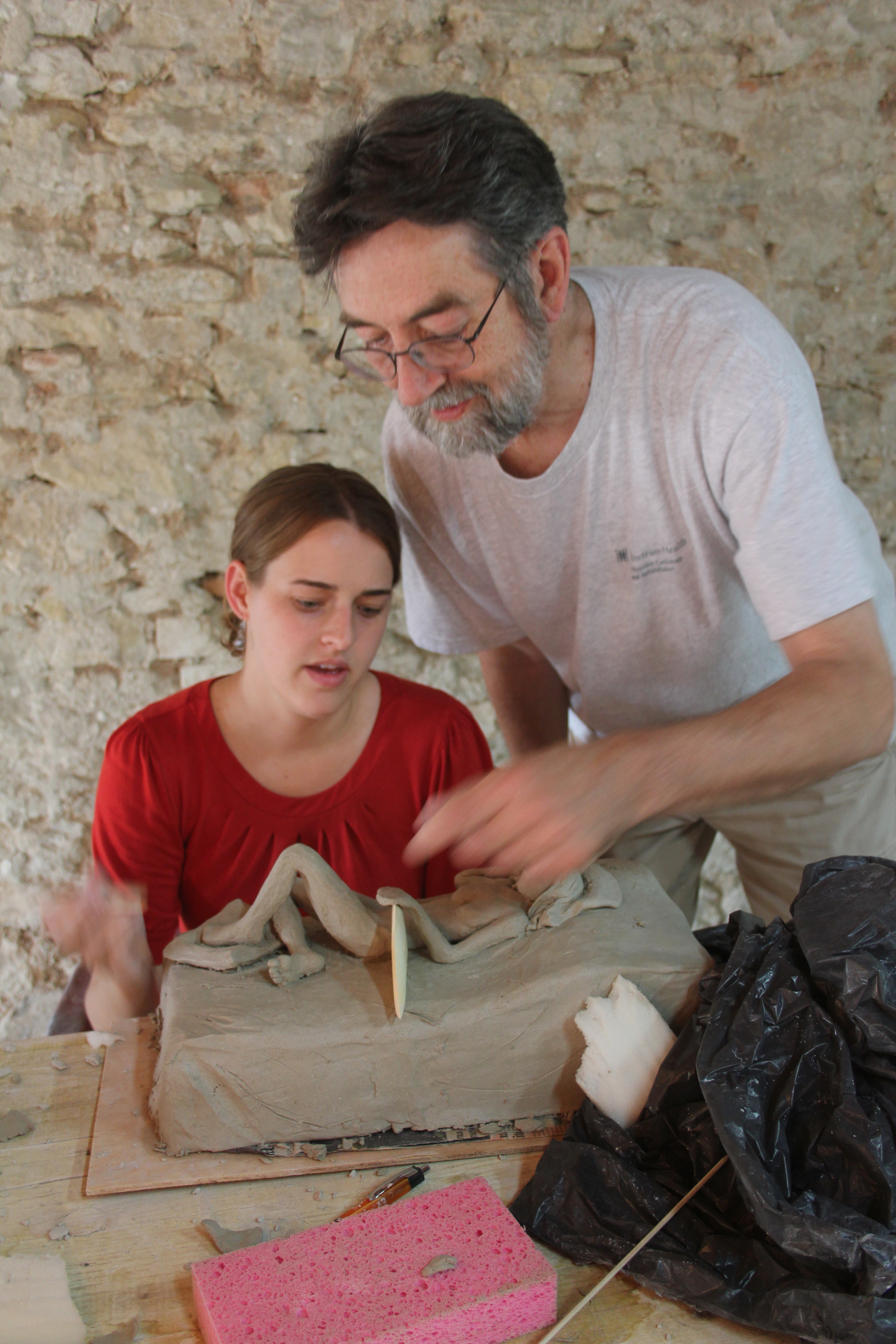 “Seeing that folk art, as well as the fine art and the more traditional socialist-realism of Eastern European art, it really broadened my outlook about what art is and can be, and I hope I brought some of that back,” he said. 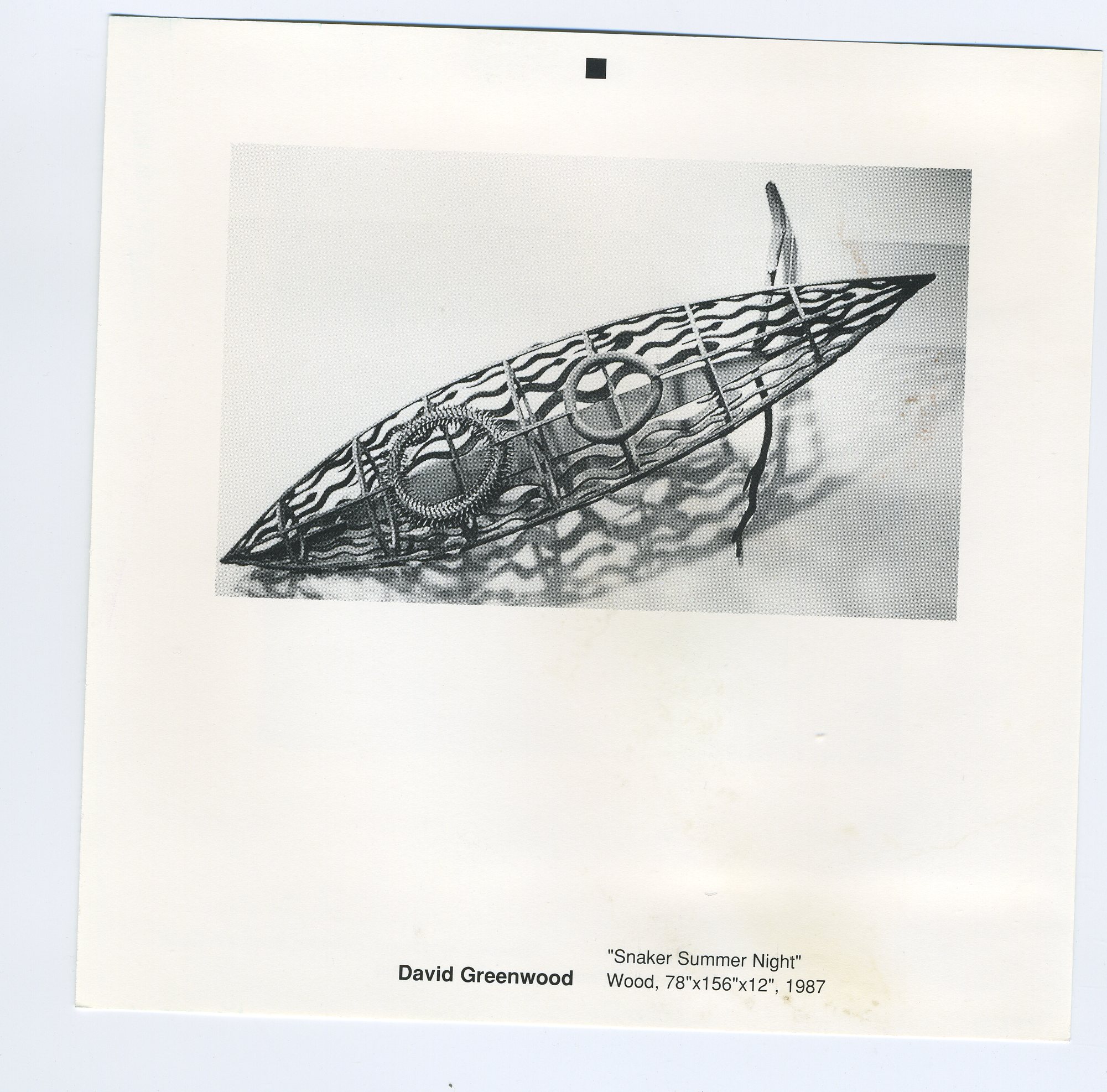 But it wasn’t just what Greenwood brought into the classroom that made him an effective teacher; it was also the places – both physical and conceptual – he encouraged students to explore outside of the classroom. He led KCAD students on 15 different summer study-abroad trips to England, Ireland, Mexico, and Italy, among other places, and regardless of what country or setting he was teaching in, he worked to build a sense of creative vitality in his students that went beyond technical ability and conceptual dexterity. When a dedicated Sculpture and Functional Art program was established at KCAD in 2004, Greenwood was the clear choice to be the inaugural program chair. In 2005, former Michigan Governor Jennifer Granholm presented him with the ArtServe Michigan E. Ray Scott Lifetime Achievement Award for Creativity in the Arts. 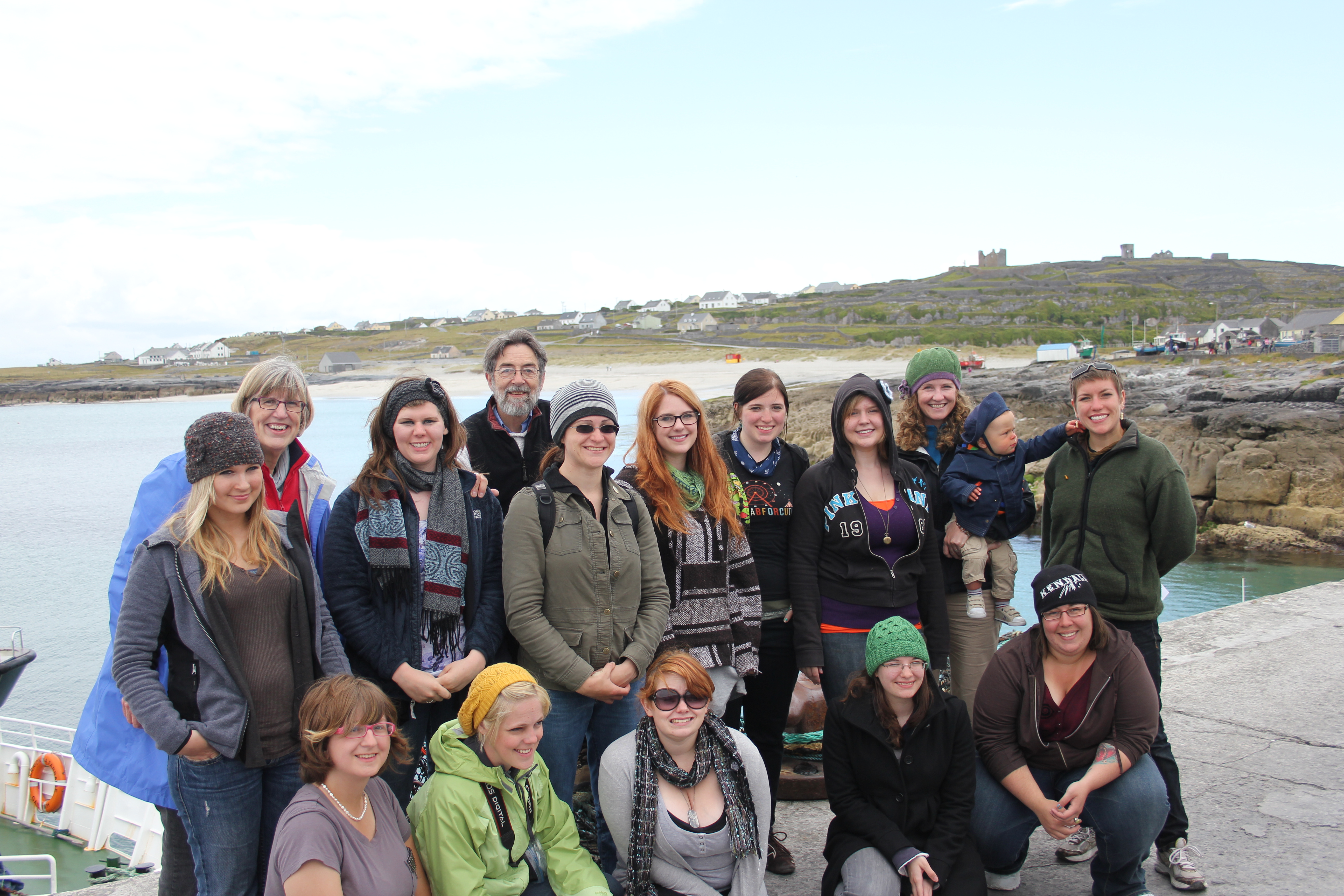 Greenwood with former Michigan Governor Jennifer Granholm in 2005, when he received the ArtServe Michigan E. Ray Scott Lifetime Achievement Award for Creativity in the Arts

Ron Riksen, Graphic Design professor and current interim dean of KCAD, has been with the college since 1971, and he believes that Greenwood and others like him have helped shape KCAD into what it is today.

“David has been integral in helping KCAD refine its educational mission, and if you look at all of the growth that’s occurred since he started working here, it shows that he’s also done a great deal to help us champion the tremendous value of creativity,” Riksen said. “He has demonstrated his sincere love of teaching for 32 years and we will miss him greatly. But I know that he will never stop creating; it’s in his blood.”

Greenwood putting the finishing touches on "Seedpod 11 (Spike), his entry into ArtPrize 2014

Greenwood may be retired from teaching, but he’s as hungry as ever for fresh experiences and new challenges. He served as the B.O.B.’s first ever outdoor curator for ArtPrize 2014, sifting through hundreds of submissions to decide which work would be on display at the massively popular venue. He’s also been working steadily with Twisted Fish Gallery in Elk Rapids, MI to coordinate the sale of several sculptures from his “Seed Pod” series. One of his “Seed Pod” sculptures is also on display in the Walk of Art outdoor sculpture park in Elk Rapids. This coming spring, the Grand Rapids Art Museum will host a retrospective exhibition of his work – a tremendous honor and accomplishment – featuring a number of his large-scale works and half-scale kayak sculptures. The next chapter of his life, however, will not be spent looking backwards.

Greenwood posing with his sculpture "Seedpod 10 (Nut House) at the Walk of Art outdoor sculpture park in Elk Rapids, MI

Speaking at KCAD’s commencement this past spring, Greenwood implored students to remember that, “the larger your island of knowledge, the longer your shoreline of wonder.” When it came to passing this lesson on to his students, he always led by example, and even in retirement he continues to be a champion of wonder. His legacy is not one of individual contribution, but rather one of symbiotic growth throughout his long relationship with KCAD and his students. 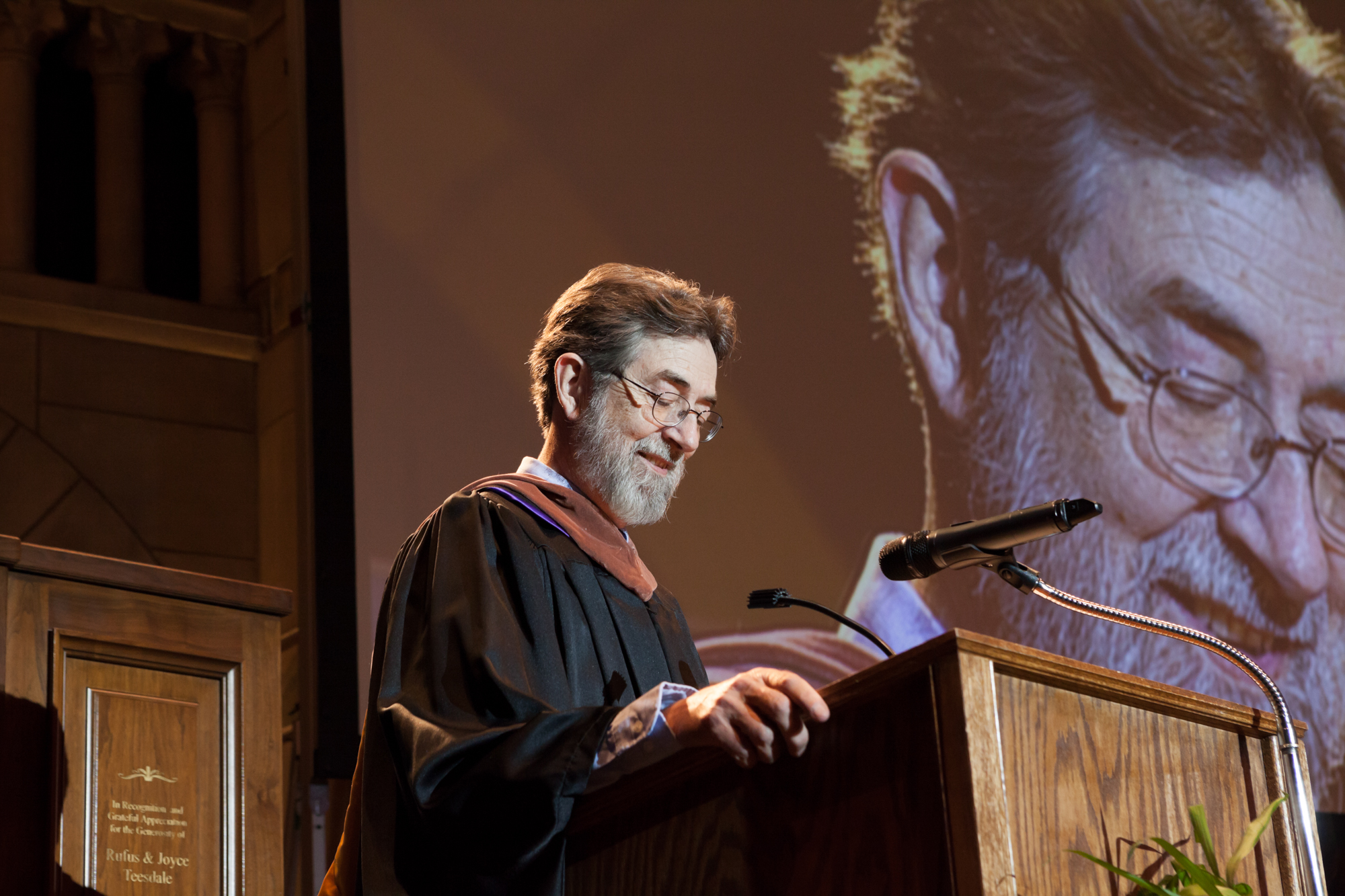 Greenwood speaking at KCAD's 2014 Commencement ceremony, where he was honored with the title of Professor Emeritus

“KCAD has impacted me more than I’ve impacted it,” he said. “My dad was a college teacher too, and one Father’s Day I gave him a carved stone for his desk that said ‘teachers plant the seeds that grow forever,’ and I think that’s all you can hope for after a life in teaching is that at least some of the students that you’ve worked with admired what you did, remembered what you said, and maybe even became artists or teachers themselves. One can only hope that their lives were enriched by something you offered them.”

Learn more about David Greenwood's life and work at dsgreenwood.com.