The American Advertising Awards­–it’s where the advertising industry’s elite gather each year to recognize the small fraction of work that is truly exceptional, and  two students from the Graphic Design program at Kendall College of Art and Design of Ferris State University (KCAD) found themselves in the spotlight this past summer, winning ADDY awards at the prestigious national level of the 2017 competition.

Current student Laura Bosscher (Meekhof) and Madison Bracken, a December 2016 graduate, were both honored at the 2017 awards gala in New Orleans for work that communicated something personal. 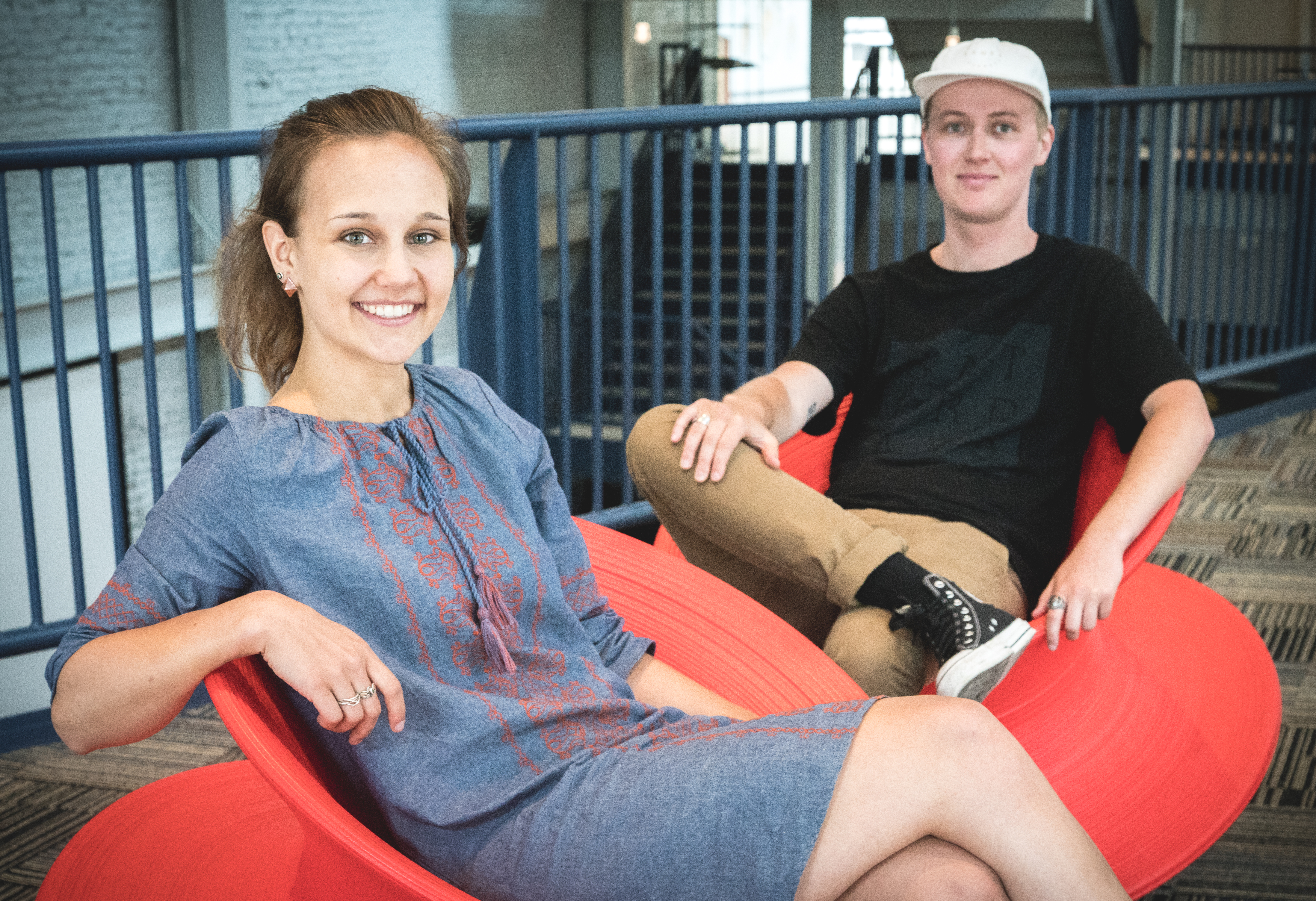 For Bosscher, that something was design itself. Her “ABC Book of Designer’s Confessions,” a tongue-in-cheek take on life as a designer, earned a gold ADDY in the student book design category. With razor-sharp wit, Bosscher’s books satirize the playful aesthetics and alliterative, sing-song-y language of children’s books, assigning each letter of the alphabet a cynical, yet humorous design reality.

My aim at the onset was to explain with little poems, phrases, and illustrations these things which most designers would agree are the bane of our existence,” says Bosscher. “I wanted the content to be relatable, but I also wanted the voice to be authentically mine.”

Visually, the books bear the influence of designer Charles S. Anderson, known primarily for his work with French Paper Company. Bosscher was first exposed to Anderson’s work in class, and knew immediately she wanted to put her own spin on it. All of the illustrations in “ABC Book of Designer’s Confessions” are completely original, and share a common minimalist style.

(above and below): A look inside the "ABC Book of Designer's Confessions" (images courtesy of Laura Bosscher)

“I was just discovering new ways to marry my Illustration minor and my Graphic Design major, and was really getting good at vectoring,” Bosscher says of the book’s genesis. “I had also explored poetry the summer before, so I was drawing inspiration from all these different places.”

Like Bosscher’s book, Bracken’s silver ADDY-winning magazine design, “Elsewhere,” isn’t so much an advertisement as it is a window into a way of life. Over the course of what he calls a “100% passion project,” Bracken connected with friends and peers from around Grand Rapids and captured their stories, experiences, and personalities. His endgame: to form a larger picture of the lifestyle, culture, art, music, and identity of young people in the city. 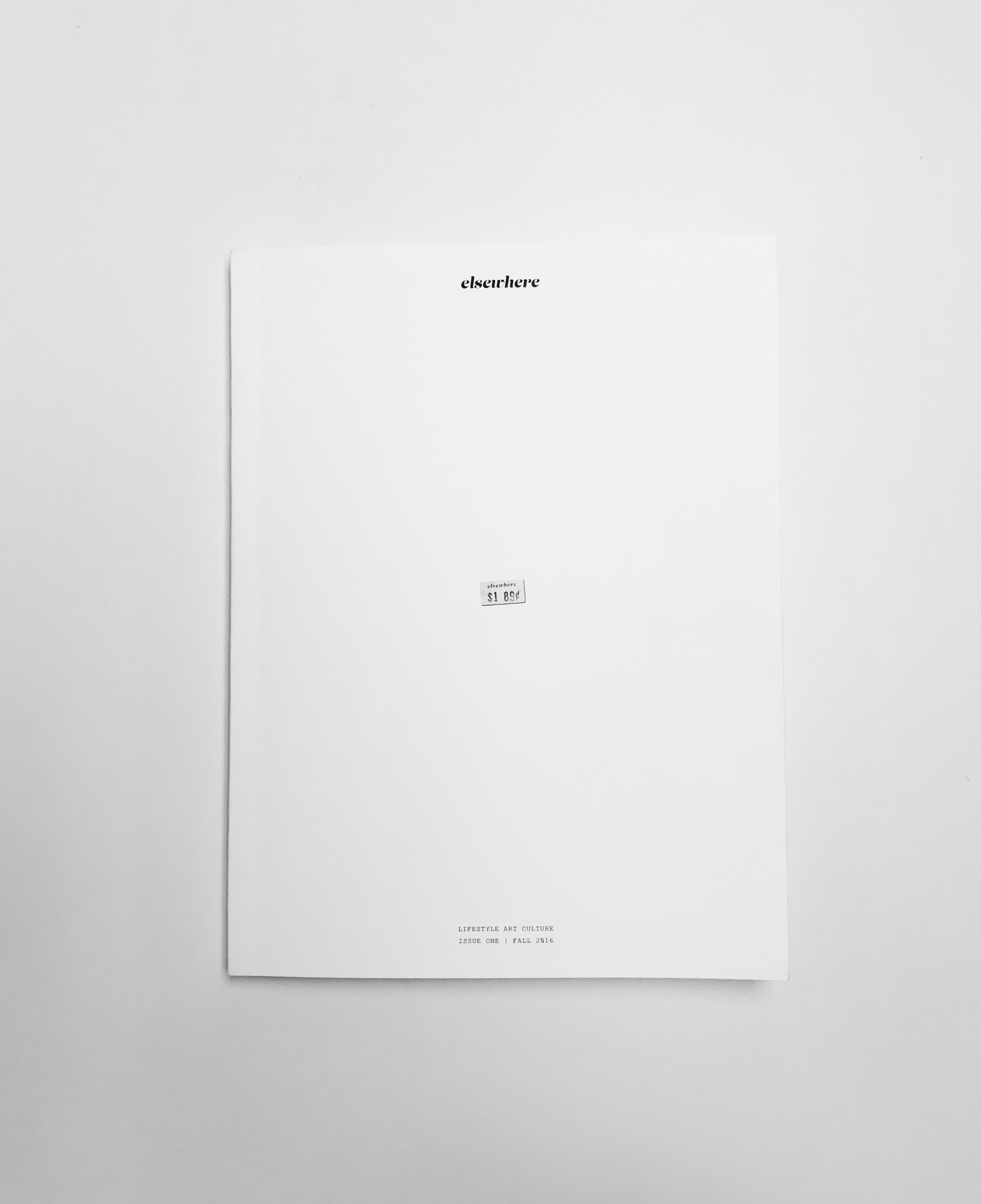 “Our assignment in class was to develop a 40-page publication; I ended up with 114 pages,” Bracken says. “It took a year to develop from start to finish, but it was an amazing experience to be able to design something that I cared deeply about. This publication shows what my life outside of school is all about, so creating it kind of became my life for a while too.”

“I’ve always been surrounded by photographers and illustrators, seeing their work and wishing I could do that, but this project really affirmed for me the power of collaborating and working with people who have the same respect for the process and the product,” he says. 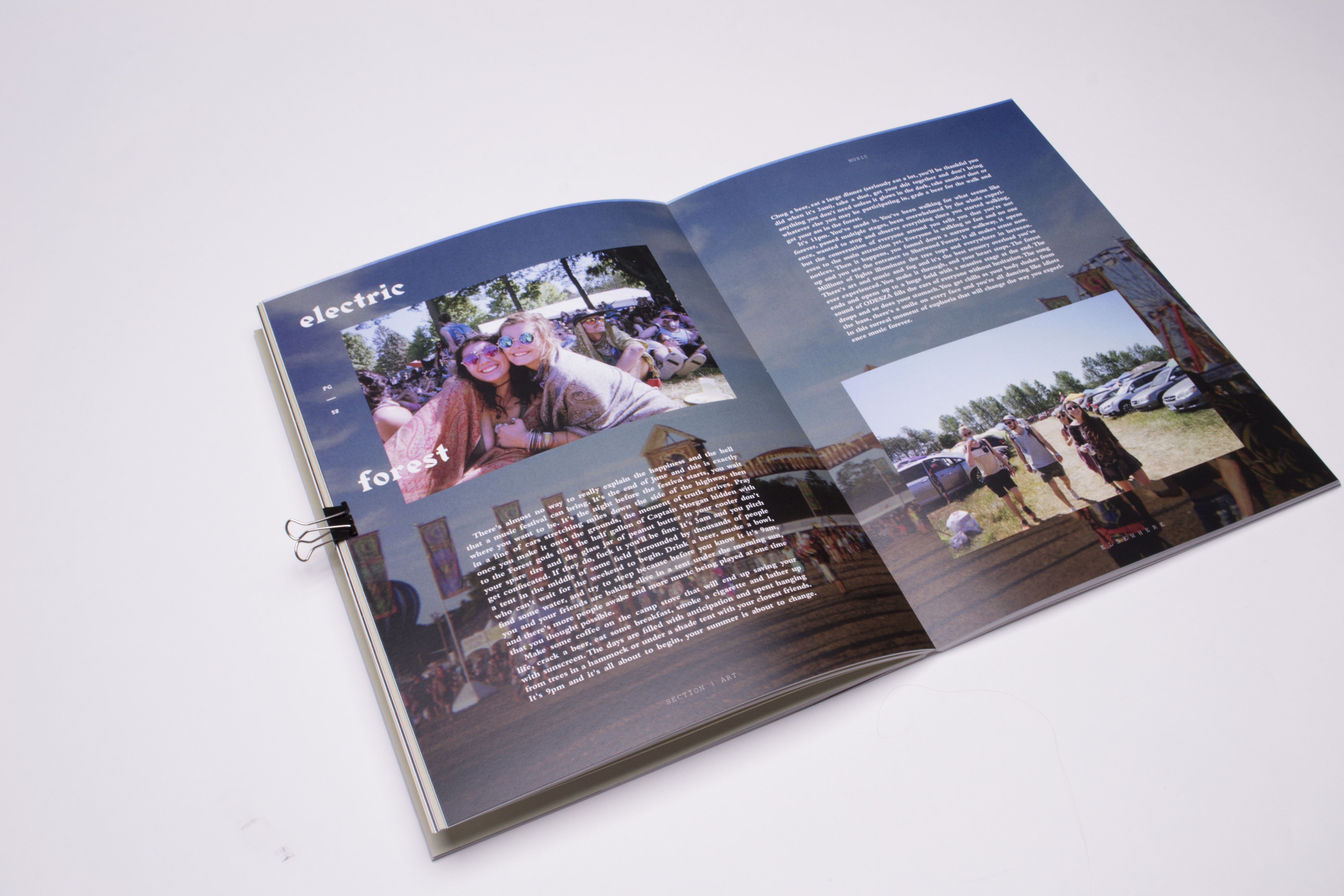 (above and below): A look inside "Elsewhere" (images courtesy of Madison Bracken)

After collecting the photographs and illustrations, it was up to Bracken to craft a written narrative, as well as a visual layout that would lead viewers through that narrative.

“A picture of, say, a band on a stage can only tell you so much,” he says. “For me, the written narrative really transforms that image into something much deeper.”

As they worked their way through the local, then district, and finally national levels of the American Advertising Awards, earning the highest possible honors along the way, Bosscher’s and Bracken’s entries continued to impress judges with their meticulous attention to detail and seemingly effortless sense of relatability. Still, both young designers were pleasantly surprised to find themselves nominated alongside designers who had created campaigns for the likes of Doritos, Sprint, Netflix, and the Hillary Clinton Campaign, to name a few.

“It was really inspiring,” Bosscher says of the award ceremony in New Orleans. “The level of skill and talent on display was unbelievable, so to know that we were on the same playing field was an incredible feeling.

Bracken adds, “It was surreal; you’re walking around the gala looking at all the entries on display and you can’t even tell the difference in quality between the student and professional entries. To know that we too could attain this level of quality was very empowering.”

Both designers will now carry this defining experience forward into the next phase of their respective careers. Bosscher is being courted by Yahoo! for a design internship, and will also continue to do freelance work for various clients. Bracken continues to do freelance work following internship and contract positions with Rockford, Mich.-based AUXILIARY Advertising & Design, and plans to relocate to Portland, Ore. in the near future.

“Laura and Madison always put maximum effort into being a KCAD student, so it’s no surprise that they continue to reap the benefits of that dedication,” says Graphic Design Program Chair Joan Sechrist. “These awards demonstrate a strong understanding of how form, function, and concept unite to create powerful and compelling visual communication. We in the Graphic Design program know they will continue to produce dynamic work in the years to come.”

Dean of Academic Affairs Charles Wright added, “KCAD congratulates Laura and Madison on their extraordinary achievement, and wishes them the best of luck going forward.”