Renato, chair of KCAD’s Allesee Metals and Jewelry Design program, was selected for inclusion in IMAGINE PEACE NOW by a panel of jurors that includes renowned metalsmith Boris Bally and artist Shepard Fairey, among others. The traveling exhibition debuted this January at East Carolina University and is currently on display at the Boston Society for Arts and Crafts through June 10, 2017.

Artists, particularly those who work with metals, were asked to submit proposals for original pieces that repurposed disabled, inoperable handguns as an element of the artwork. Renato, fresh off a sabbatical in which he experimented with combining virtual fluid dynamic simulations and 3D printing technology, was inspired to channel his findings into a proposal for the exhibition.

He created his piece, “Irreverensibility,” by scanning a disabled handgun with one of the 3D scanners in KCAD’s FlexLab, a state-of-the art digital fabrication facility. With the 3D scan, Renato set up software simulations in which the gun’s 3D form was filled with digital fluid and then shot with a digital bullet, using a complicated technical processes similar to those used in Hollywood to create certain digital special effects – but Renato isn’t one to shy away from pushing boundaries in his creative practice. 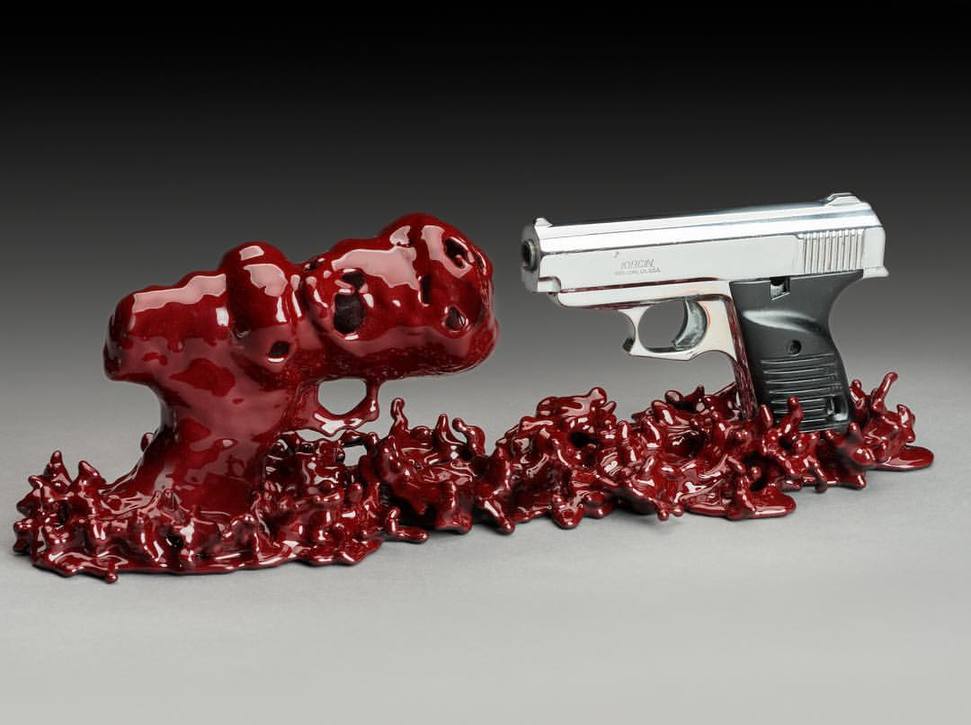 "Irreverensibility" by Phil Renato (image courtesy of the artist)

“Basically, I filled the volume of the 3D scan with virtual particles and then ran another virtual object into them using physics variables such as gravity and heat until I got the look I wanted,” Renato says. “I knew there would be some amazing work in this exhibition, and I really like when my work looks as little like everyone else's as possible.”

Once he got a rendering that fit his vision, Renato 3D printed it and combined it with the original disabled handgun to create an arresting depiction of what he calls “compelling unreality.” His approach was inspired by his fascination with themes of violence in author Thomas Pynchon’s sprawling 1973 novel “Gravity’s Rainbow,” a work considered by many to be the preeminent postmodern novel.

“While my piece is not an illustration in the sense of trying to help people understand that book better, [compelling unreality] is the general type of sensation I always hoped to provoke,” Renato says, “It’s one I thought I could borrow that would match my formal interests as well as make a point, which, I suppose, is that a life has only one direction, and it cannot be recalled if lost.”