Tom Edwards never planned on being an educator, but in hindsight, stepping into the classroom was the best career move he could have made.

This past December, Edwards retired from Kendall College of Art and Design of Ferris State University (KCAD) after 26 years of teaching in the Industrial Design program while simultaneously nurturing a highly successful professional design practice. For him, teaching and doing are in constant conversation, and as a result, the program he’s played a key role in shaping is one in which students’ learning is driven by real-world experiences. 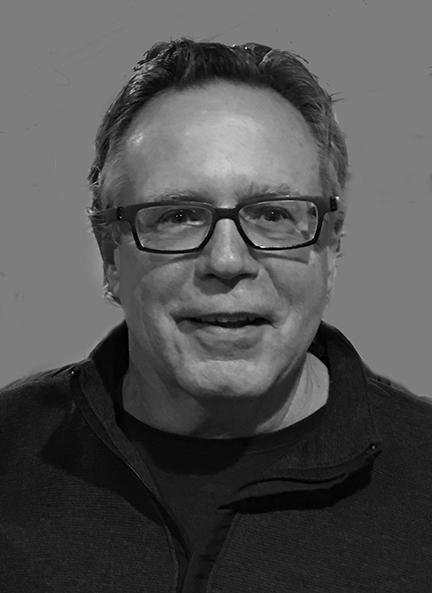 A decade prior to joining the KCAD faculty in 1991, Edwards was making a name for himself in the design department of furniture giant Herman Miller. Just two years into his tenure, he was promoted to design unit manager, one of a handful in the organization. He stewarded award-winning work like Ethospace, an office furniture system that won an Innovation By Design (IBD) Gold Award in 1985.

From there, Edwards was put in charge of Herman Miller’s European Product Design, coordinating product development for a diverse international market. Not long after, he was promoted to Design Planning and Administration Manager, a role that thrust him into the company’s strategic planning process and gave him purview over the initiation of new design programs.

In 1986, Edwards struck out on his own, channeling his experience and industry connections into Design Allegro, a consultancy he still runs today that specializes in product development services for the contract furniture industry. He hit the ground running, winning two coveted Best of Show awards at NeoCon­­­ in his first five years in business: one for the Capella Chair designed for Herman Miller and another for the Calibre File Cabinet designed for Knoll.

For Edwards, the path forward seemed clear until a former Herman Miller colleague serving on KCAD’s Board of Directors offered him a chance to teach a class in the Industrial Design program.

“I thought ‘yeah, that would be fun,’ and I taught one class the first semester. Then the college asked me if I wanted to teach two classes, and I said ‘yeah sure, sounds fun,’” Edwards recalls. “Before you know it, I was heading the program.” 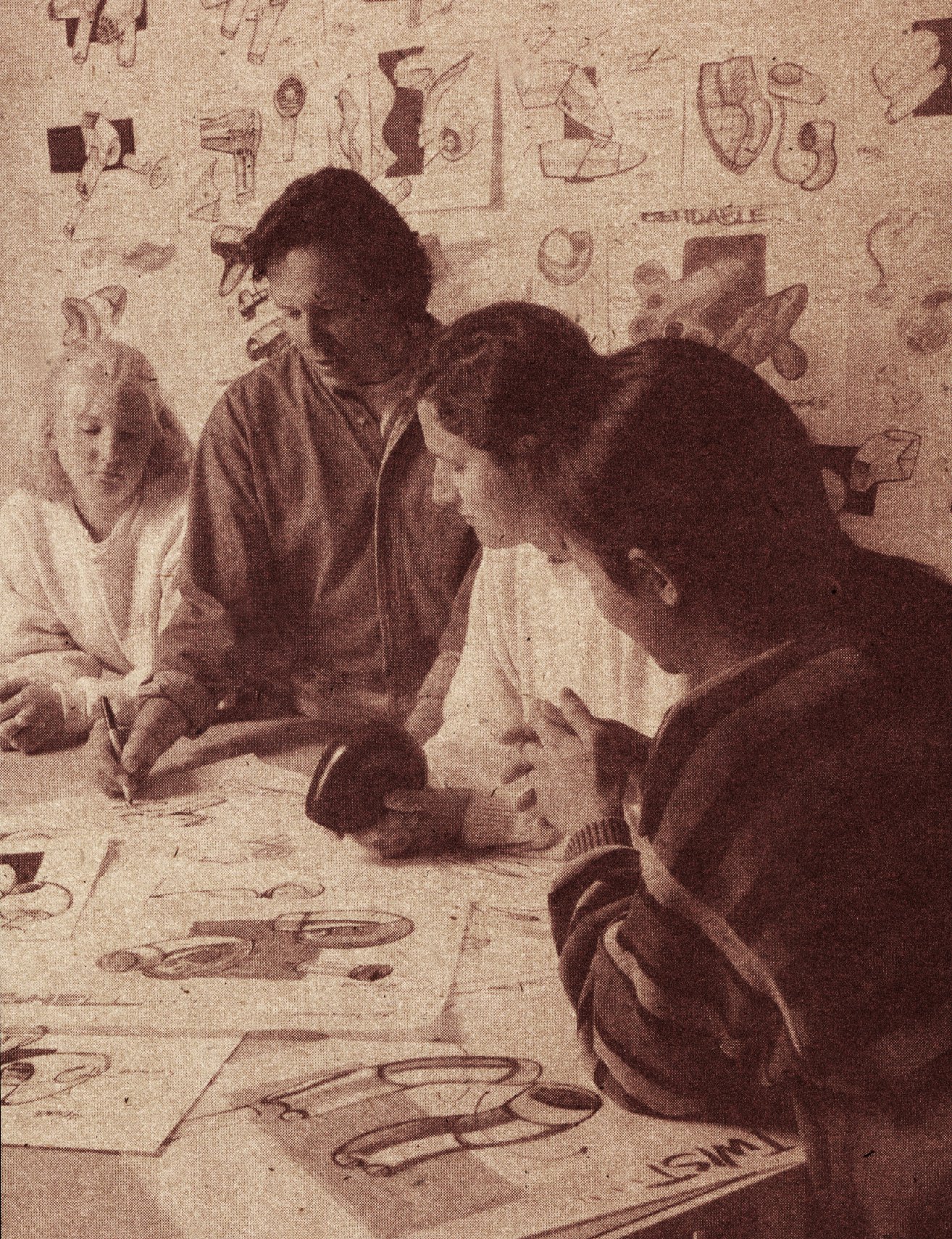 Edwards teaching at KCAD in the early 1990s

KCAD faculty are active professionals whose work informs their teaching. For Edwards, bringing the same design methodology that powered Design Allegro into the classroom was not only natural, but revelatory.

“Right off the bat I found this great balance between my professional design work and teaching,” he says. “To be a teacher, you have to know your stuff, and as a designer, I benefited from the dissection of the process that happened in teaching it to my students.”

In Edwards’ mind, there was no better way for students to learn the design process than to employ it in solving problems for actual clients. Each semester, he leveraged his industry contacts to develop collaborative projects that challenged students to respond to the real-world needs of local and regional companies like Steelcase, Wolverine Worldwide, Whirlpool, and Bissel.

“To me, the most important thing was to create a well-balanced, pragmatic, young designer who could immediately do the things that manufacturers wanted them to do,” Edwards says. 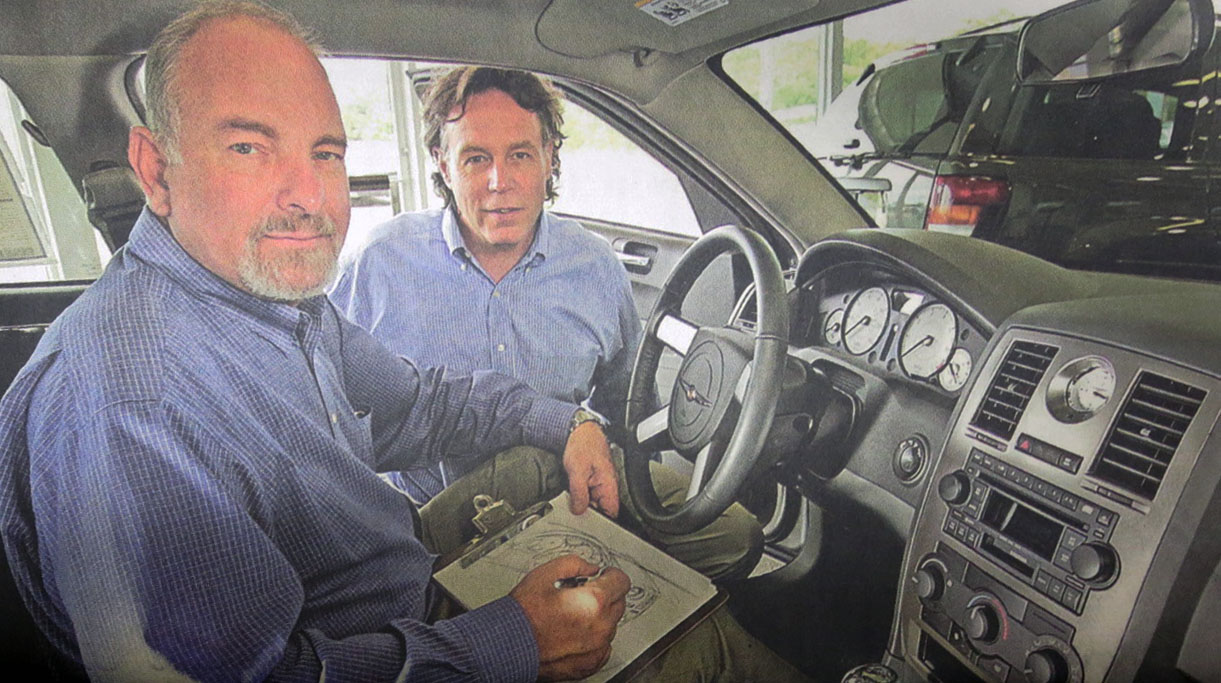 Not only were students exposed to the realities of working as an industrial designer in a wide range of industries, from furniture to footwear to appliances, they were developing a credible portfolio of work and growing their professional networks as well. The projects’ tangible implications helped them think beyond design to also consider aspects like marketability, price, and innovation. Essentially, Edwards was building a pipeline connecting education to industry.

“It’s about giving students a chance to explore, but it’s also about practical experience,” he says. “The projects lead to internships and the internships lead to full-time jobs upon graduation.” 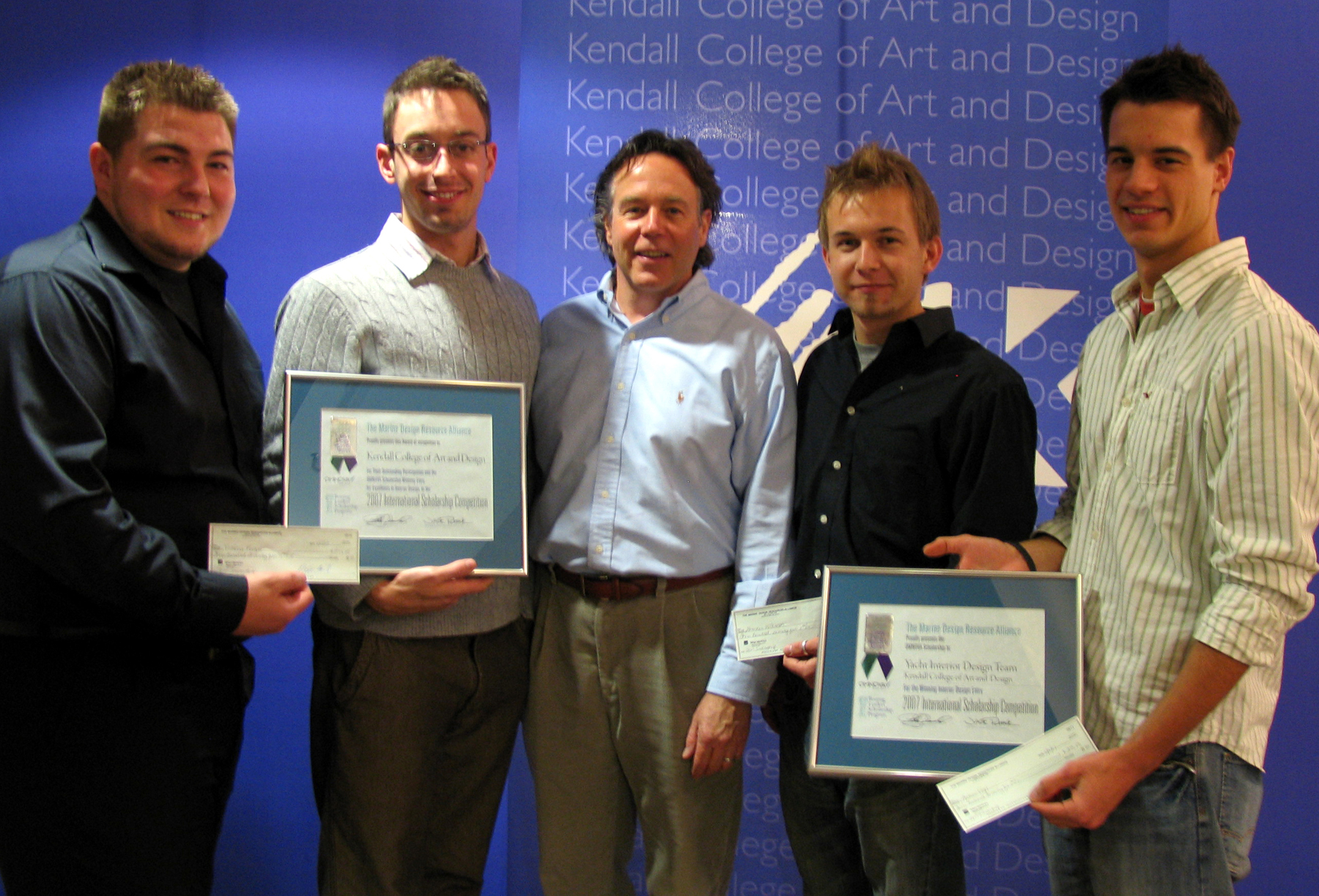 Companies, for their part, were eager to glean valuable fresh perspective on their products as well as meet the next generation of talented young designers. Later in his tenure at KCAD, Edwards would invite industry professionals to teach classes on specialized topics like model making and the human factors of design. In recent years, he helped organize an annual career event that brought representatives from various companies on campus to interview students and critique their portfolios.

“Strengthening that industry connection was really helpful in driving the program to better recognition and success,” he says. “It’s a powerful model for education.” 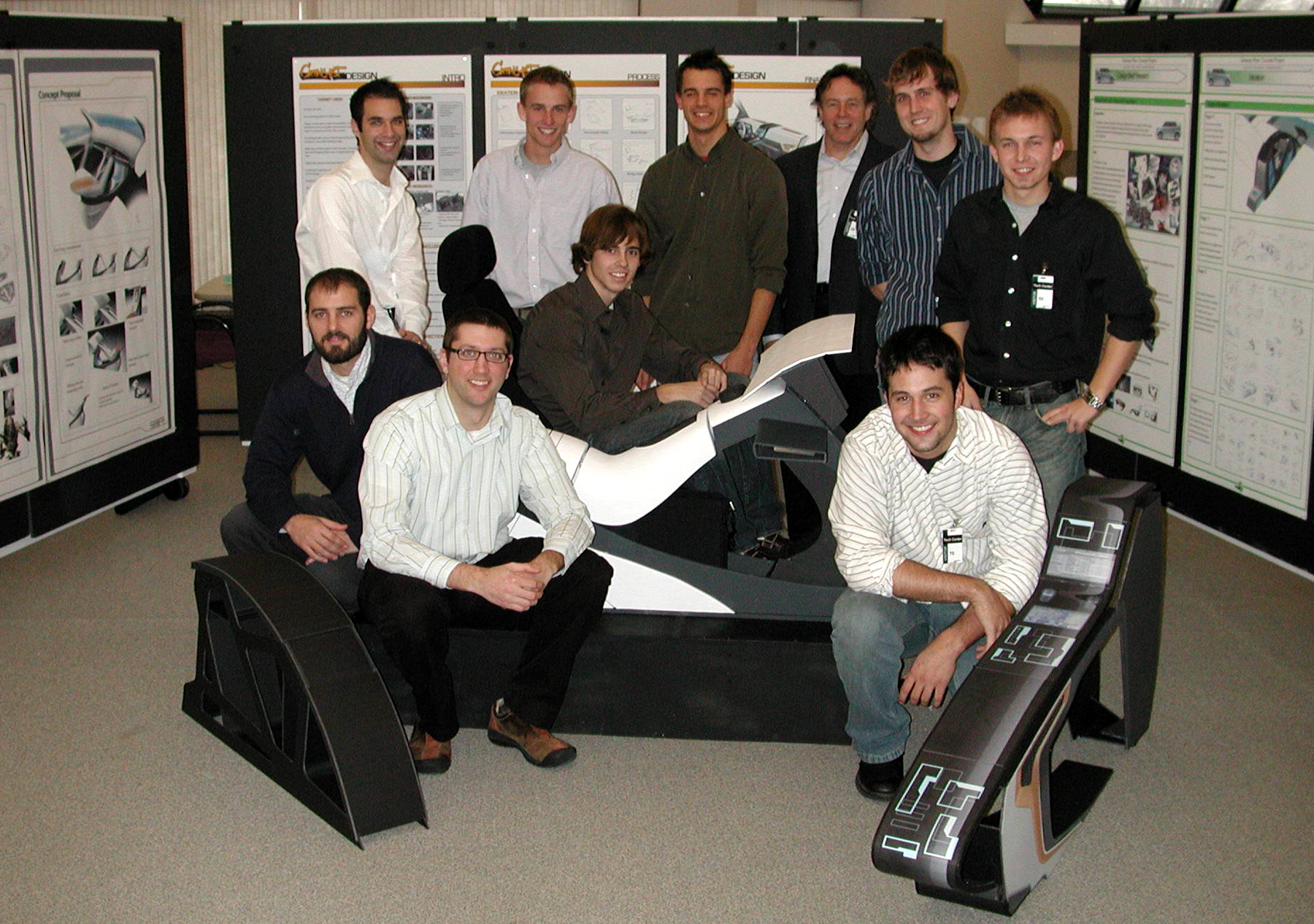 At Herman Miller, Edwards learned that the most successful designers are those who take ownership of their work. He instilled this principle in his students through open-ended assignments that empowered them to formulate and vet their own original ideas.

“I was vague, but that was planned. I didn’t want to tell them exactly what to do; I wanted to see how they thought through the problem,” Edwards says. “In the real world, managers don’t want to hold their employees’ hands. When you own a project, you have to own the challenges that arise and think critically about what needs to be done next.”

The approach worked so well that it landed Edwards and the Industrial Design program in the national spotlight in 1999, when a cover story in Interiors and Sources lauded Edwards as having introduced his students to “a world beyond design.” The article highlighted both the strength of the program’s student work and the formidable presence of its alumni in industry-leading companies. 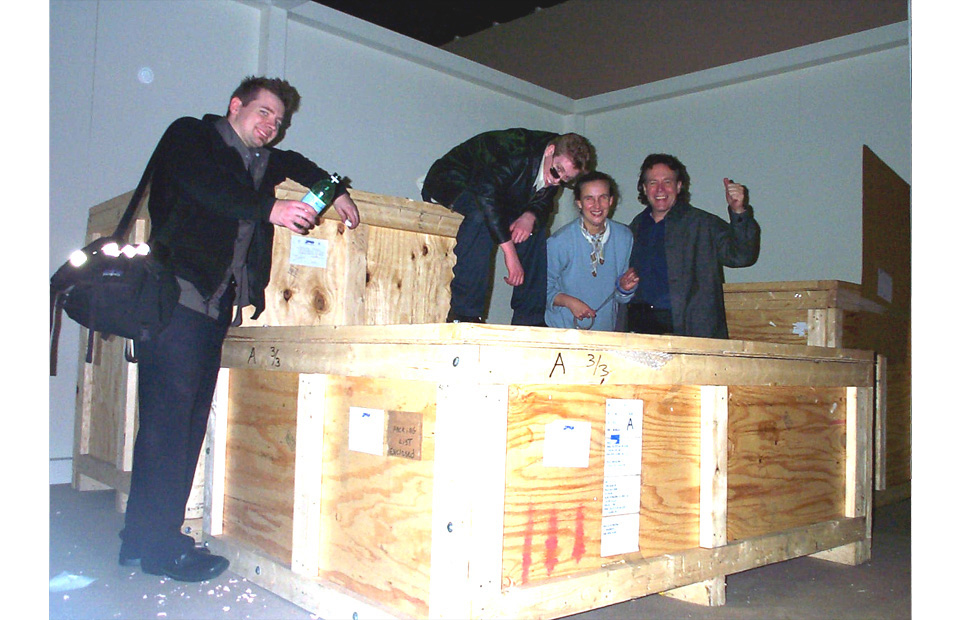 (above): In 2002, Edwards (far right), his wife Annie (2nd from right), and some of his students traveled to Italy for the Milan International Furniture Fair, where their collaborative work with DuPont was featured; (below): Edwards and KCAD Metals and Jewelry Design Professor Phil Renato during a 2007 trip to Dubai, where KCAD student work was showcased at the Office Exhibition, an international trade show (images courtesy of Tom Edwards) 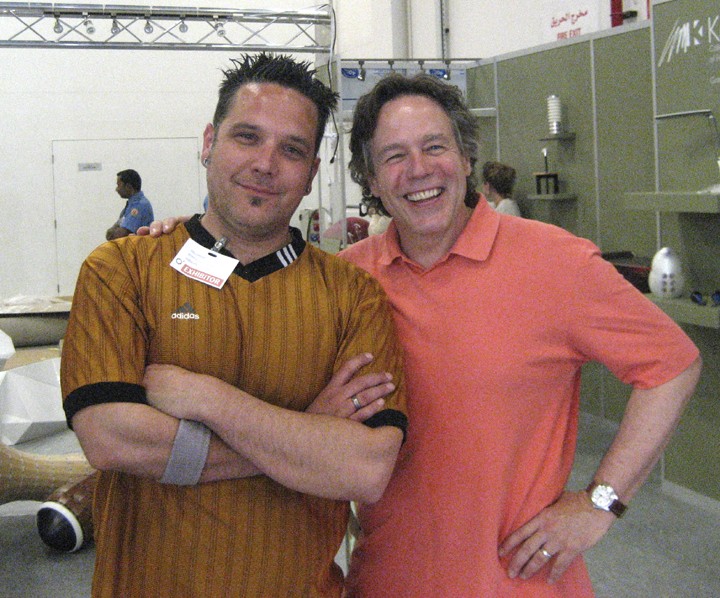 Also critical to Edwards’ success at KCAD was his wife Annie. The two met in 1985 while attending a summer workshop at OxBow School of Art and were married by 1987. Annie eventually earned her MFA from KCAD, and would go on to teach as an adjunct faculty member in the Printmaking program.

“Annie was always my sounding board and my strength in the face of all the challenges I faced as a teacher,” says Edwards. “Through her example, she made me a kinder and more generous person and teacher.”

As his students and the Industrial Design program itself excelled, so did Edwards’ own work. Since coming to KCAD, he continued to produce exceptional and influential work for the who’s who of the contract furniture industry. The Improv Stacking Chair he designed for Haworth, for instance, won Best of Show at Neocon and an Apex Award in 1994, and an International Design Excellence Award (IDEA Award) in 1995. Despite its age, the chair is still in production today and ranks as one of the company’s highest-selling items of all time. In 2000, Edwards collected his fifth Best of Show Award at Neocon for the Leverage System he designed for Teknion. 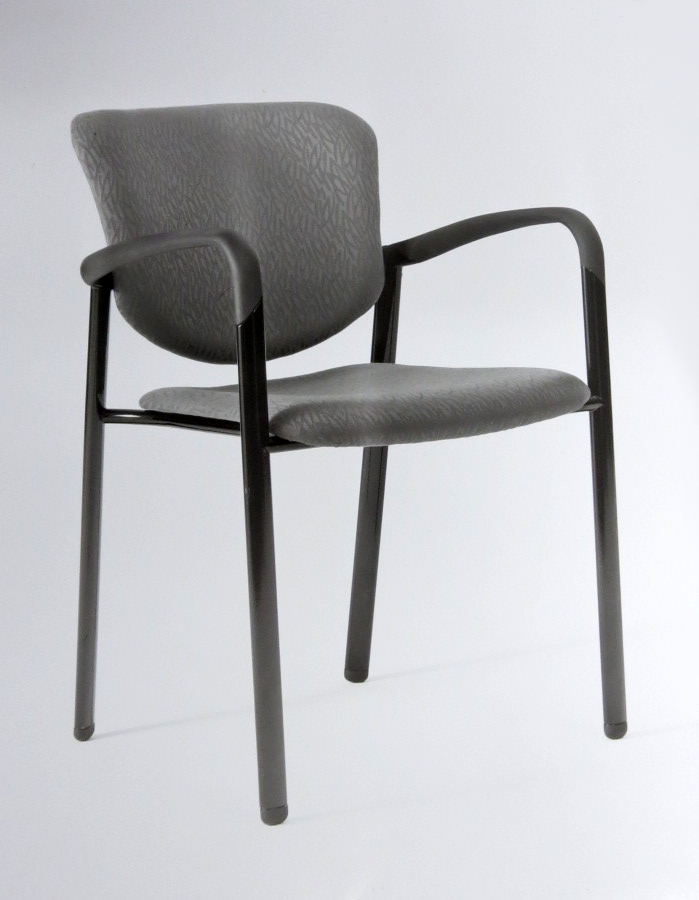 Around the same time, Edwards joined forces with Errol Pearsons, a KCAD alumnus who graduated from the Industrial Design program in 1990, to form Edwards/Pearsons Design. Over the years, the pair designed a lantern for Coleman, a jukebox for Rowe International, and a wide variety of pieces for the contract furniture industry. Along with his experiences in the classroom, Edwards credits Pearsons for helping him develop a design process centered on the user and powered by research-based problem solving. 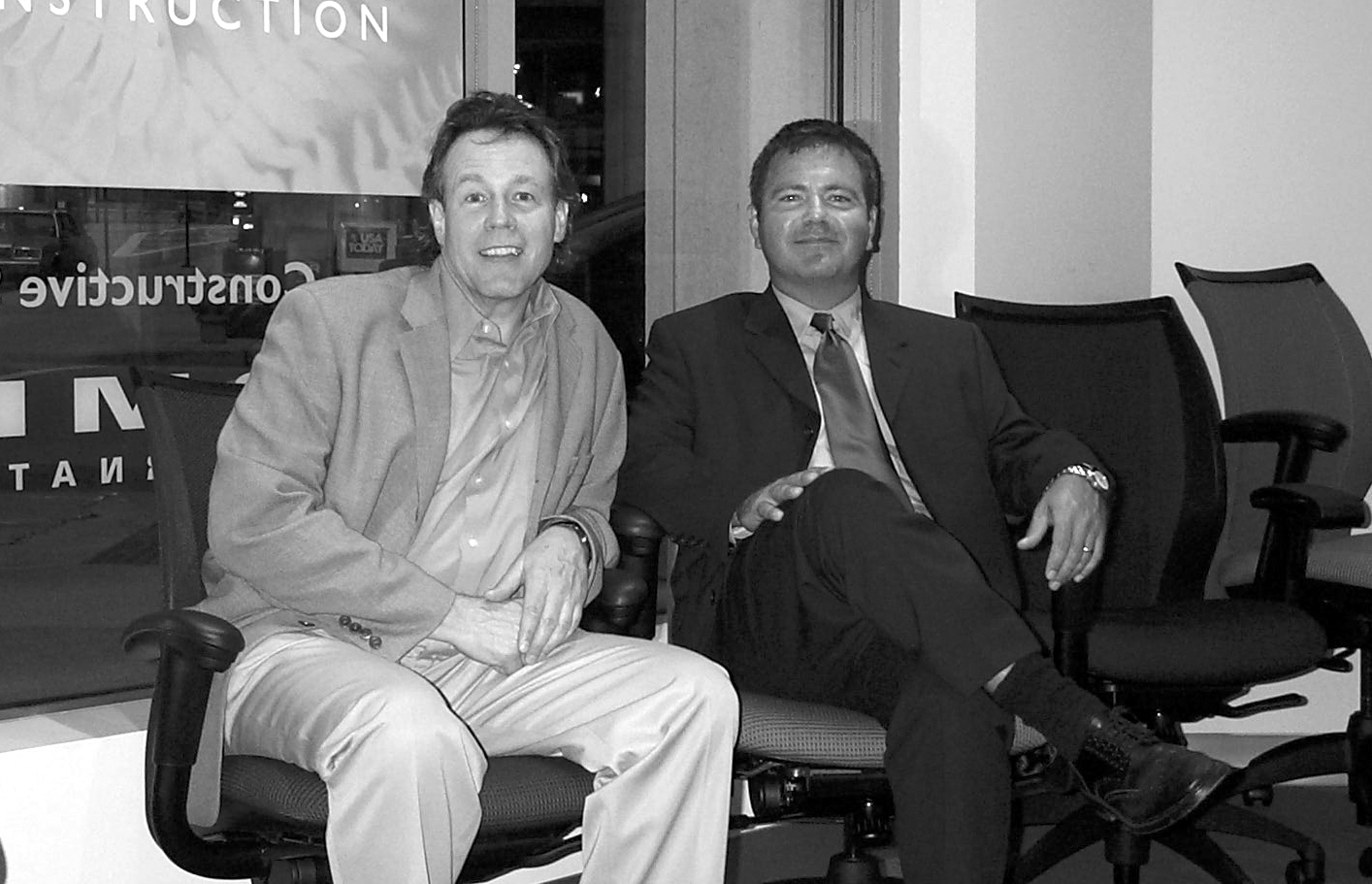 (above): Edwards (left) and business partner Errol Pearsons (right) at Neocon in 2003; (below): Rowe International jukebox designed by Edwards and Pearsons in 2006 (images courtesy of Tom Edwards) 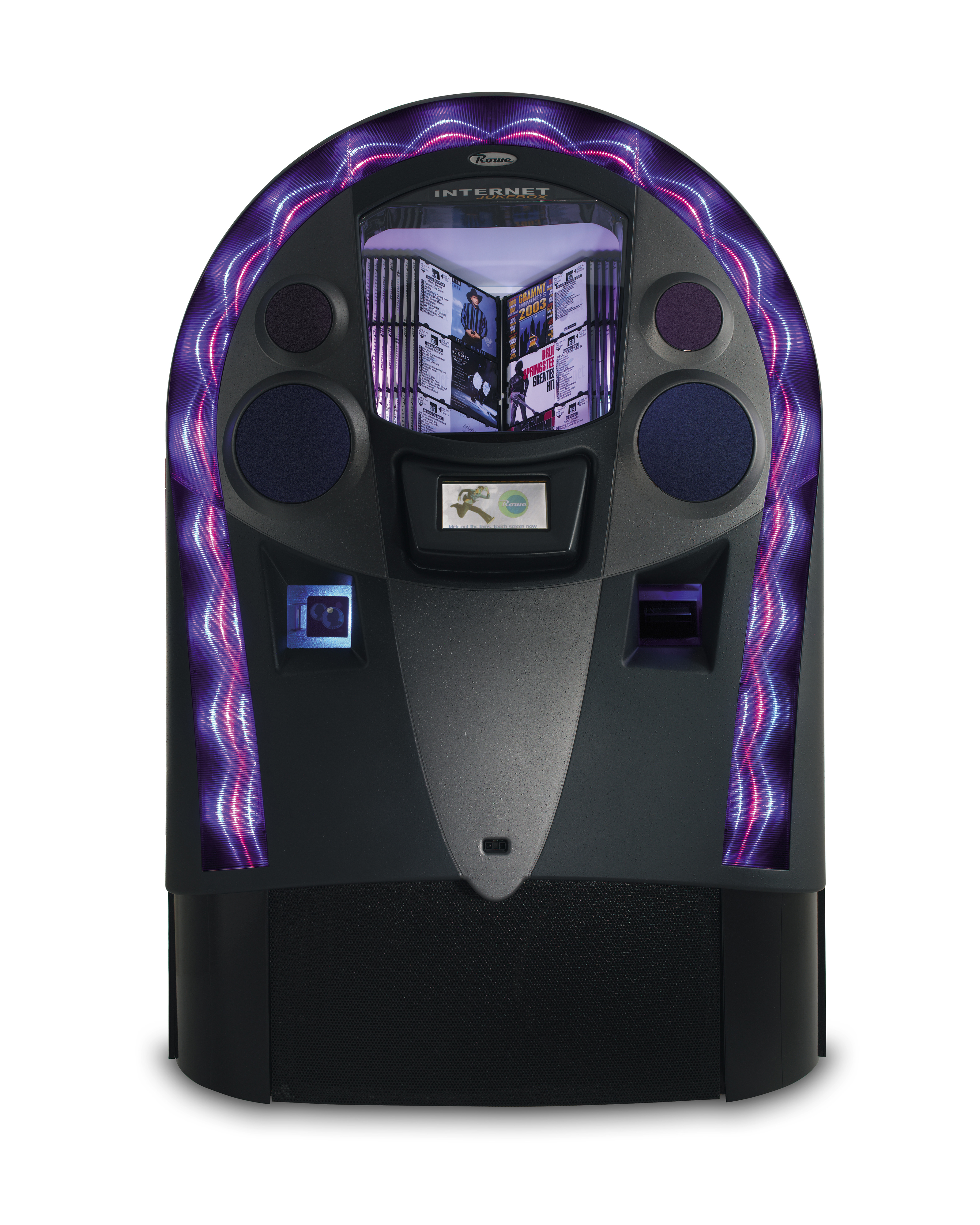 “My professional practice changed over the years because of having to think about it more from the teaching side,” he says. “I became more pragmatic in my process in terms of following the methodology that I was teaching.”

In the 21st century, Edward and current Industrial Design Program Chair Jon Moroney have been working diligently to keep the program on the cutting edge. “Jon has done an incredible job and is really moving the program in different ways,” says Edwards.

Classes in entrepreneurial design have fostered a startup spirit in students, prompting them to consider the business side of the products they’re designing. The program also participates, and frequently succeeds, in local entrepreneurial competitions like Startup Weekend GR and the MWest Challenge, with students designing products and creating business models before pitching them to a panel of judges.

The scope of industry collaborations in the program has grown too. Recent projects have introduced students to a whole new world of possible applications for their skills, from developing solutions for the healthcare industry alongside Spectrum Health Innovations to helping local startup Mackinac Technology commercialize a new heat-repellant window covering. There’s also an emerging focus in the program on service design, or designing the material components of a service to facilitate better interaction between providers and users. 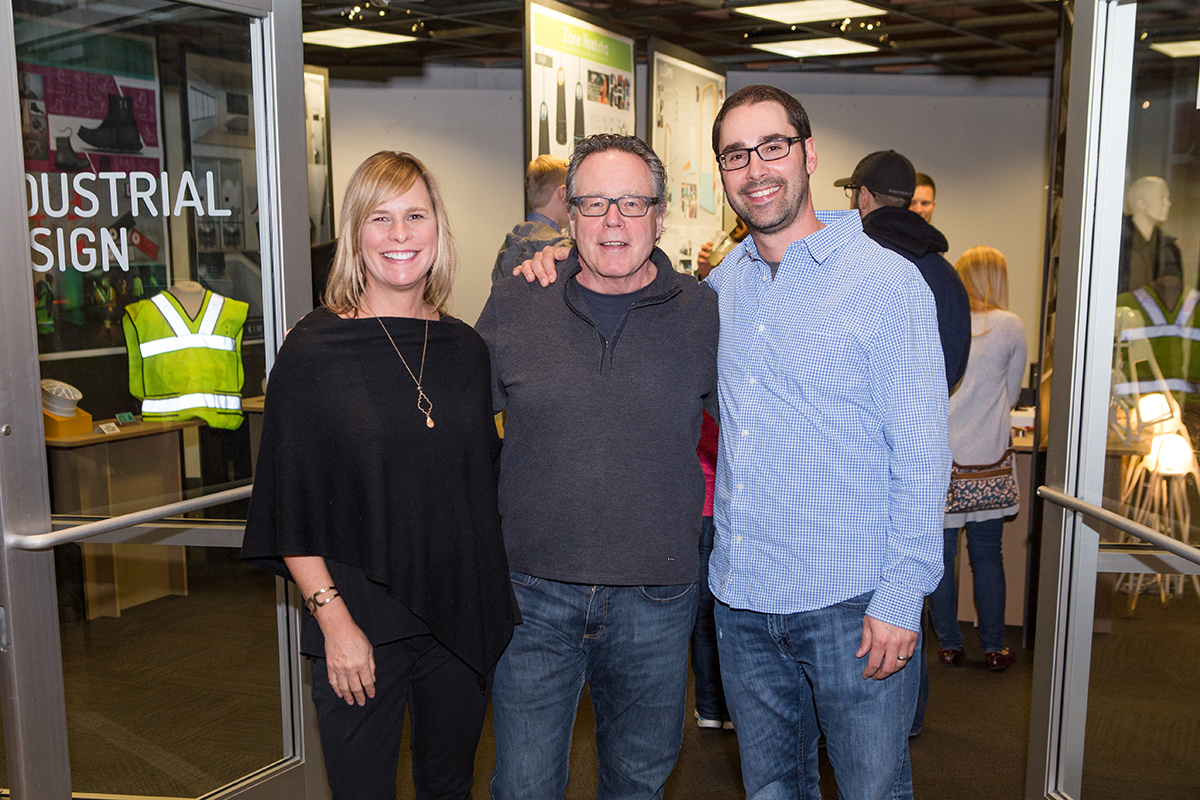 “We’re encouraging students to explore things that aren’t a typical product,” says Edwards. “We’re learning that millennials want to design for the big picture. They want to make a change in the world; they don’t just want to create another toaster.”

The program’s ability to transform both itself and its students owes much to a man who has made a career out of crafting designs and educational experiences that truly matter.

“The most fulfilling part of my career at KCAD has been working with students, and the greatest pleasure that I’ve received from working here is seeing them not just succeed, but go on to affect industries,” the now-Professor Emeritus says. “It’s a great feeling."