Emma Riley has been fascinated from an early age by theatrical set design, how the combination of creativity and engineering can morph the static confines of the stage into rich, textured worlds that ignite audiences’ imaginations.

So, when the Kendall College of Art and Design of Ferris State University (KCAD) Sculpture and Functional Art student was offered the opportunity to create a news set for local ABC affiliate 13 ON YOUR SIDE to broadcast from during ArtPrize 10, she didn’t think twice.

“It was a chance to work on a scale that I hadn’t before, but it was also just so interesting to think about the space being used for news broadcasts but also existing within the context of a crazy, hyper-public creative event like ArtPrize,” says Riley, a junior. “I just felt like this was a project that would really help me grow.”

Riley first began sketching out ideas back in May. Inspired by the other-worldly vegetation that pervaded the 2018 sci-fi film “Annihilation,” she landed on a concept wherein 13 ON YOUR SIDE news anchors and ArtPrize visitors would be completely immersed in a vibrant fabricated oasis of colorful flowers, creeping vines, and dense foliage. In addition to being aesthetically intriguing, Riley’s concept, complete with a photo wall encouraging visitors to take and share pictures on social media, also aimed to reflect 13 ON YOUR SIDE’s connection to the local community.

“I wanted the environment to immediately grab people’s attention and draw them in,” says Riley. “The goal was to completely overwhelm their senses, so they couldn’t help but be curious and come closer. Once they did, they’d see the news anchors and read the statement and make the connection to 13 ON YOUR SIDE as a trustworthy source of information.” 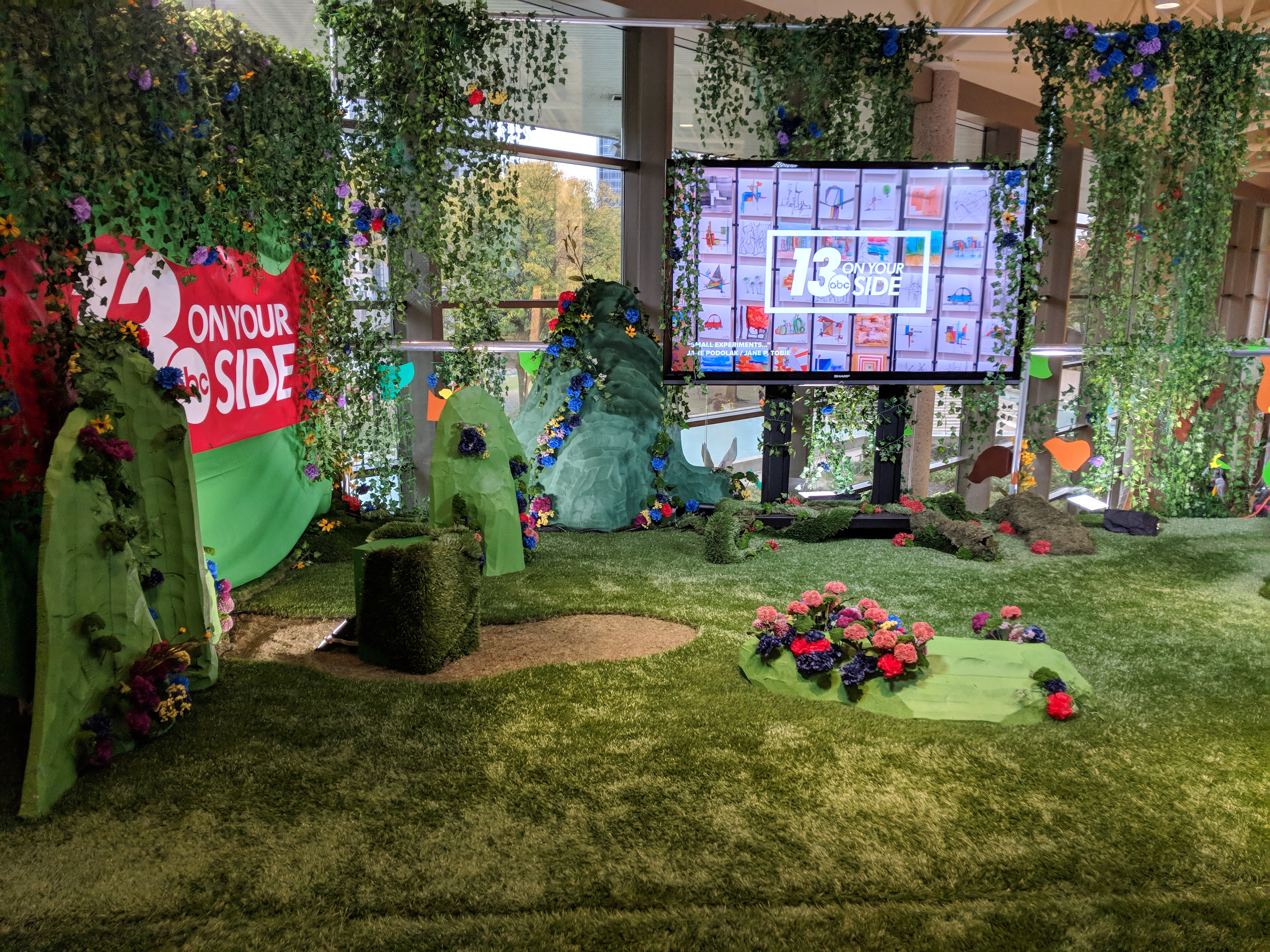 (above): Riley’s finished piece created a vibrant environment within the Gerald R. Ford Presidential Museum; (below): ArtPrize visitors crowd around to see the 13 ON YOUR SIDE news team in action in the space (images courtesy of 13 ON YOUR SIDE) 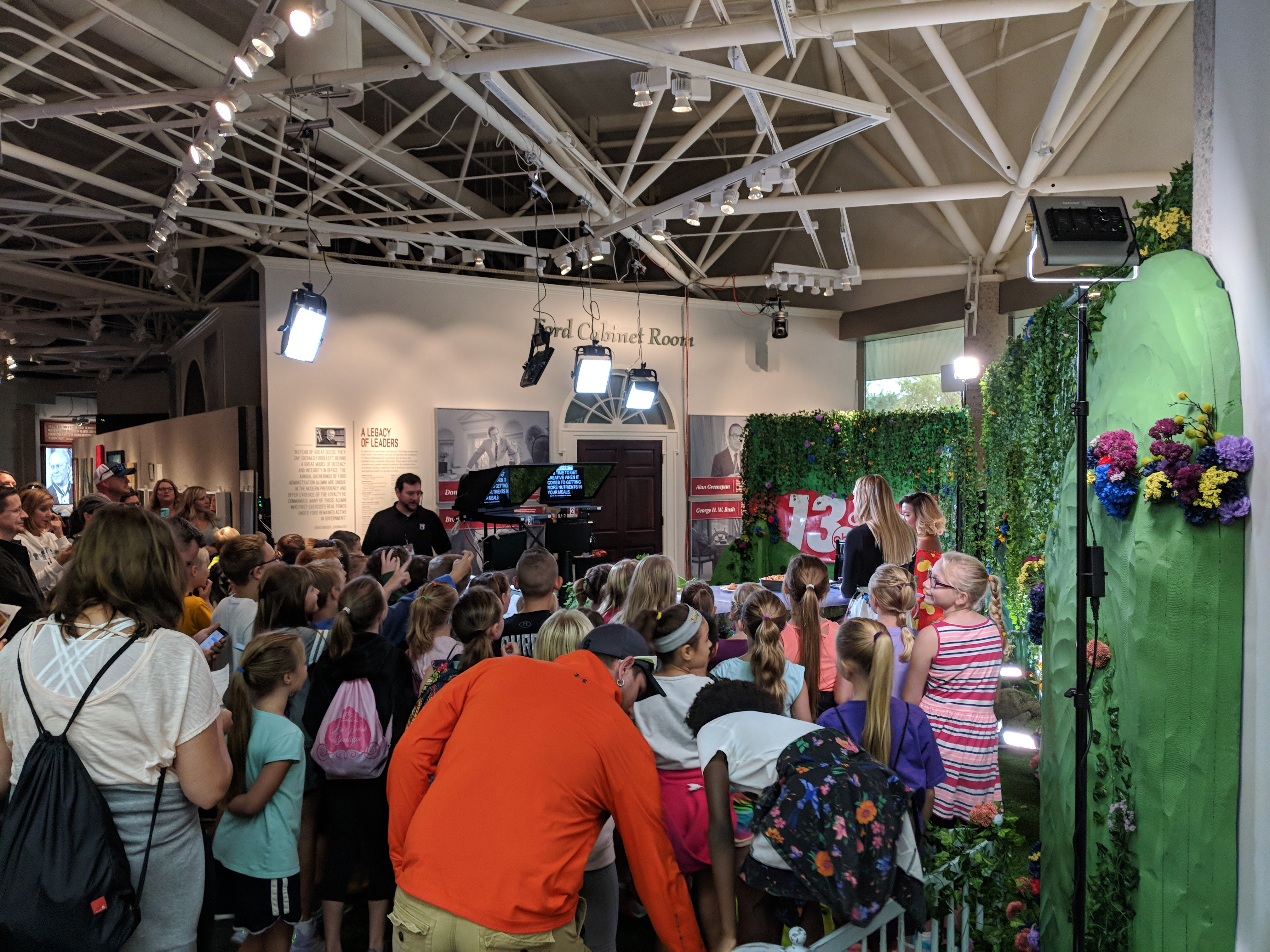 The finished piece, titled “Floral Transmit,” was not completed without challenges: Riley was working with unfamiliar materials, from astro turf and faux plants to massive hunks of foam, and had to keep both a budget and the needs of her client top of mind. But thanks to her creative problem solving skills and the guidance of Sculpture and Functional Art Professor Bob Marsh, Riley was able to create and construct the entire set by the time the fall semester began. 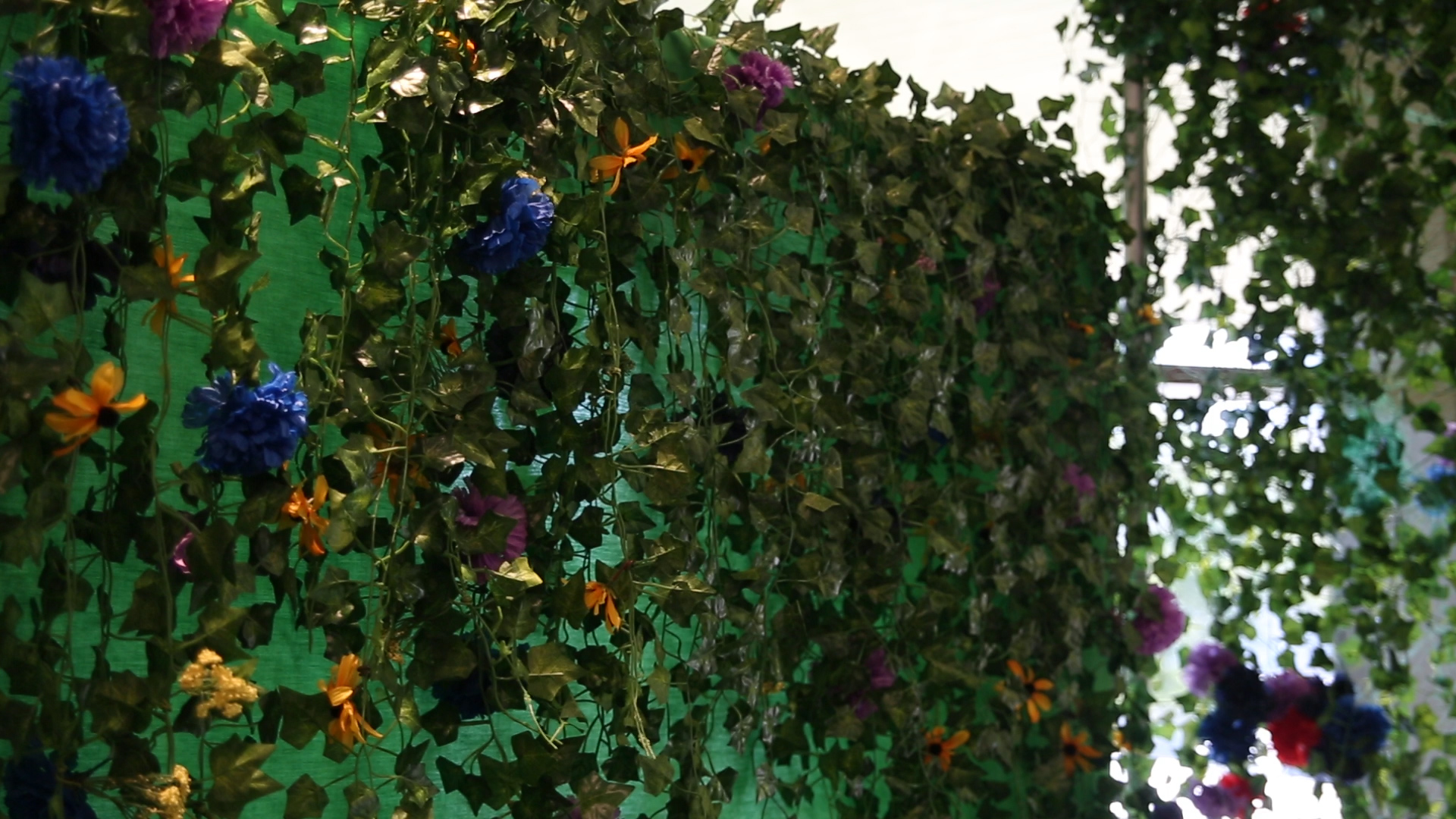 “The experience of creating for a real-world client was eye-opening,” says Riley. “Getting other people involved in my creative process really helped me think more broadly about how different groups of people might experience and interact with my work.” 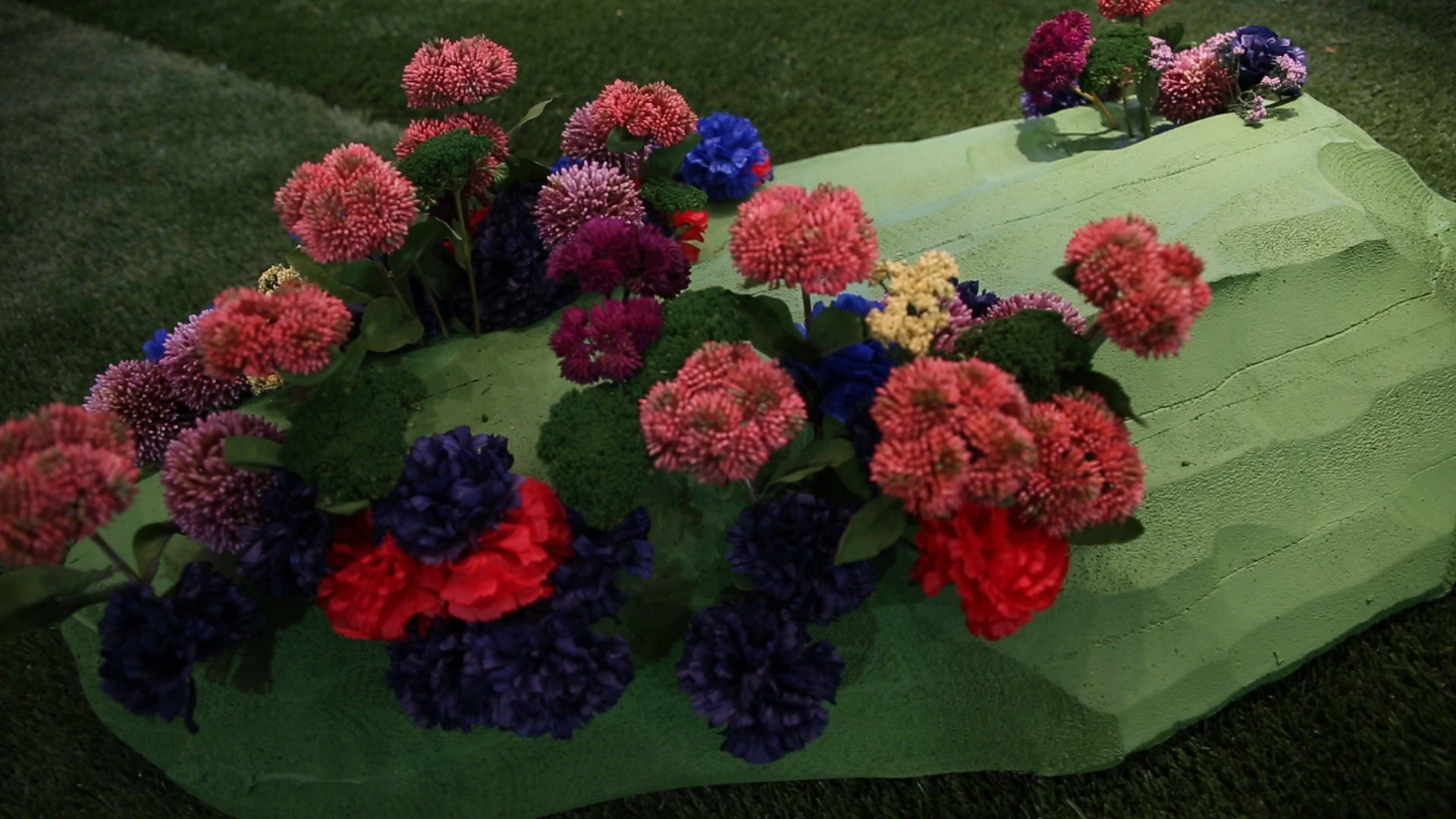 Once installed in the Gerald R. Ford Presidential Museum, 13 ON YOUR SIDE’s ArtPrize headquarters for the past four years, “Floral Transmit” became an official entry into the competition. While it may not have ended up in the winners’ circle, Riley says the greater reward was seeing visitors engage with the space she’d created.

“I had a chance to be a fly on the wall a few times, and it was fun watching people’s reactions. Some people were confused until they got closer and read my artist statement, and a lot of people, especially kids, were just immediately attracted to the space. To have a chance to put my work where so many people would interact with it was special.” 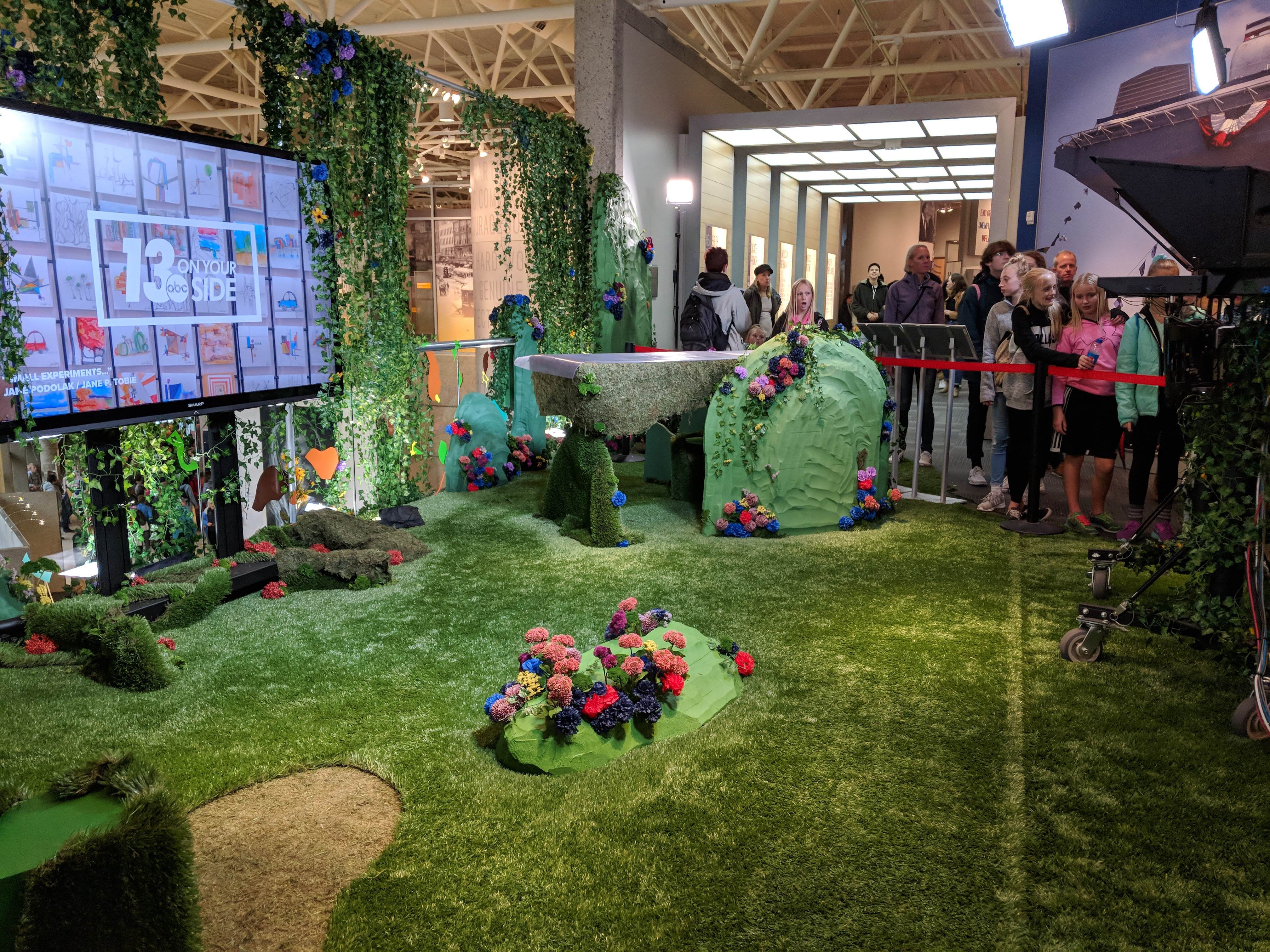 This is the third year in a row KCAD students have collaborated with 13 ON YOUR SIDE on its ArtPrize broadcast space.

“We were impressed with the space transformation Emma created,” said 13 ON YOUR SIDE Director of Marketing Jon Flis. “We wanted a performance space, which was a much larger undertaking than we’ve done in the past, and Emma listened to our needs and created a piece that served our functions while still exercising her creative voice. She was always more than willing to make tweaks and improvise in her design when faced with a changing need. We value innovation, so we enjoy the chance to celebrate art while giving up-and-coming artists like Emma a chance to shine.”

Now that ArtPrize 10 is over, Riley is channeling her experience back into the classroom, where she’s focusing on making more functional work. In one class, it’s a decorative lamp; in another, a foam head that can be used in tandem with software to map CGI special effects. Ultimately, she wants to design sets for theatrical and motion picture productions, a goal she’s confident her time at KCAD will help her reach.

“I’m really fascinated by creating things that all these different elements of a bigger project or production can interact with, and my professors are very supportive of that,” Riley says. “They’re always finding ways for me to integrate my career aspirations into the type of work I’m doing in class.”

(video courtesy of 13 ON YOUR SIDE)

(video courtesy of 13 ON YOUR SIDE)