Every student has been told how important networking and interacting with professionals is to their own professional success. However, conferences and expos can be expensive, public lectures can be crowded and impersonal, and hectic work and school schedules often prevent students from participating in workshops or competitions.

These were precisely the kinds of barriers that Ken Krayer sought to remove when he assumed the role of Director of Business Engagement at Kendall College of Art and Design of Ferris State University (KCAD) this past spring. With over 25 years of experience in the design industry, including leadership positions at Steelcase and Haworth, Krayer has built an impressive network of his own. As the fall 2014 semester approached, he began to think about how he could leverage his connections to bring professional interaction directly to KCAD students.

“I was talking to a colleague of mine in the industry who was planning a trip for a speaking engagement in Chicago, and I started thinking about what I could do to get him to stop off at KCAD on the way,” said Krayer. “I realized how powerful it would be to do a whole series of these little impromptu conversations, to create organic interactions where the students and the professionals could bounce ideas off of each other.”

Krayer’s colleague, designer Tom Wedell, works together with his wife, Nancy Skolos, as one of the world’s most prolific design duos. Wedell did end up stopping off on his way to Chicago, and KCAD Pop-Up Talks were born. The criteria for the talks was simple: the speakers had to already be coming into West Michigan for another purpose, they would not be paid any money, and the events would always be free for anyone in the KCAD community. Krayer also wanted to make some of the talks open to members of Design West Michigan as well in order to extend the conversation to the larger design community. 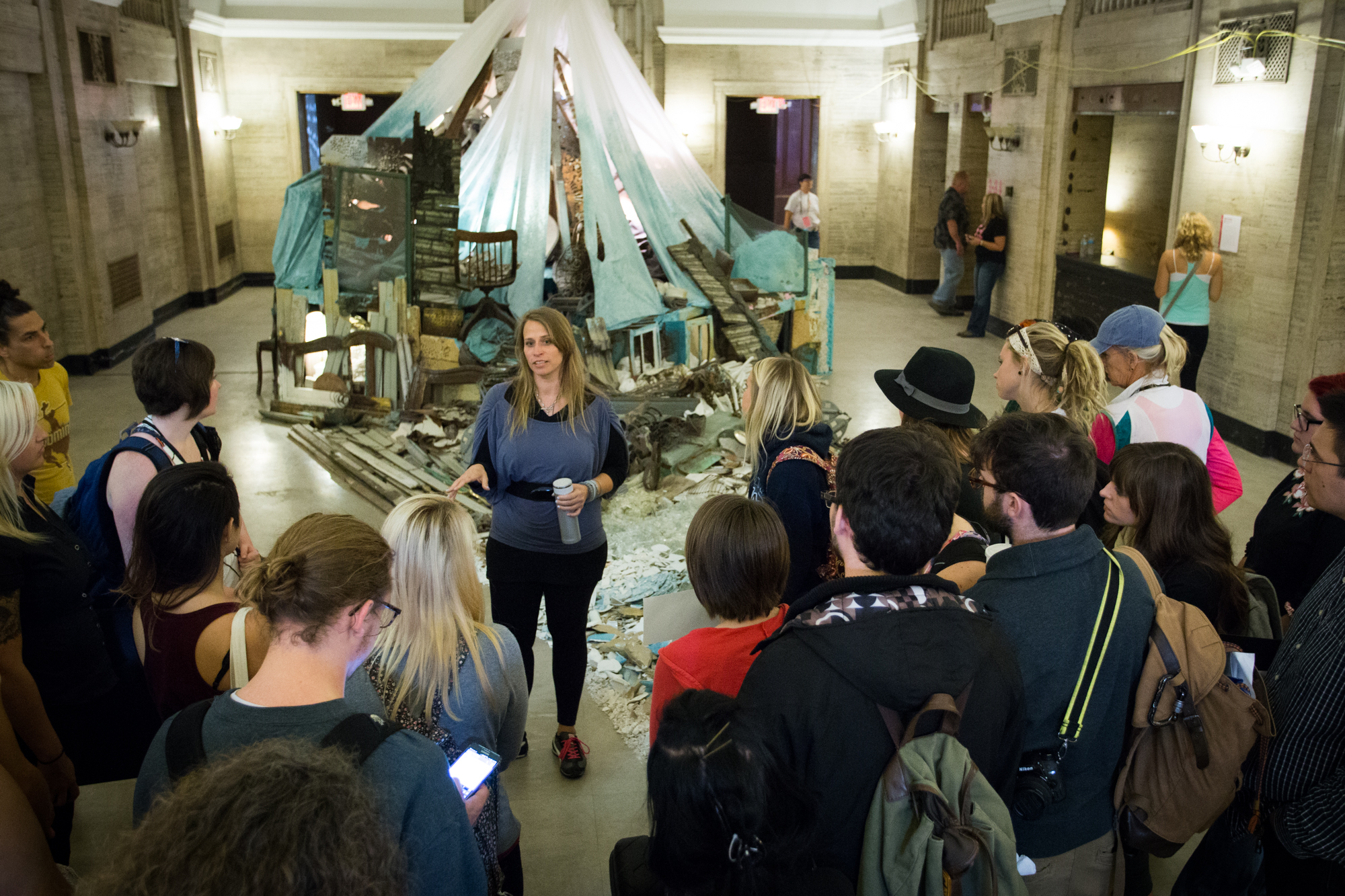 Artist Julie Schenkelberg conducting a Pop-Up Talk by her ArtPrize 2014 entry inside SiTE:LAB’s exhibition in The Morton

Wedell was more than happy to help Krayer test-drive his concept. He and Skolos have been collaborating together for more than 38 years, creating collaged three-dimensional images influenced by cubism, technology and architecture that blur the lines between graphic design and photography. Their work has been exhibited around the world.

On September 3, Wedell spoke to a crowd of about 80 students, faculty, staff, and Design West Michigan members about the process that drives his and Skolos’ collaborative success, and afterwards stuck around to answer questions and chat with anyone who was interested. “The key to the whole thing is a triadic relationship,” said Wedell. “It’s not just about the two of you; both people are working in relationship to the goals of the project, and your ego doesn’t matter because you’re asking what the project needs. Whether it’s two people or 25, it’s all about the goal.” 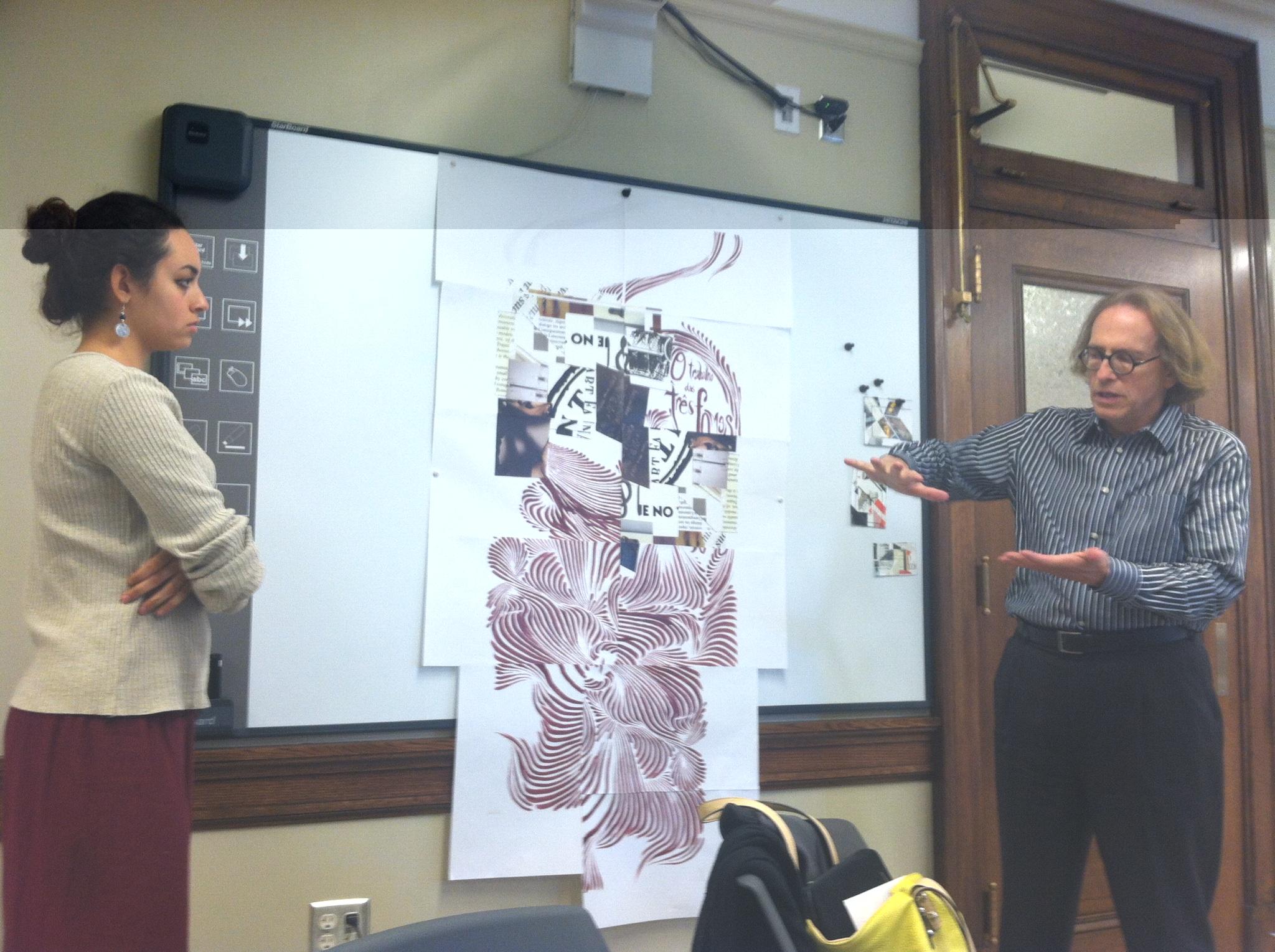 During the following weekend, Wedell conducted a collage workshop wherein KCAD students were paired with area design professionals. The pairs focused on using intuition to start the collage process and then moved into a more deliberate and intentional collage assembly. The final designs were then critiqued in a group format.

"It’s a matter of getting exposed to the idea and you can work with it later,” said Wedell. “I’ve done more lengthy workshops, but this was a really nice way to get in and do something quickly and get people exposed to the process through a positive experience.”

Skolos and Wedell also donated a sizeable collection of their own collage posters to KCAD. They now reside in the collections of the KCAD library (read more about this donation on the KCAD blog), where they remain accessible to students as an inspiring symbol of collaborative possibility.

The Pop-Up Talks concept has been steadily gaining momentum ever since Wedell’s visit. The second talk featured esteemed designer and colorist Laura Guido Clark, while the third brought students up close and personal with ArtPrize 2014 artist Julie Schenkelberg inside SiTE:LAB’s exhibition in The Morton. Talks four and five both featured Bryan Goodpaster, KCAD alum (’99, Visual Communication/Industrial Design) and creative director of trends at international design agency LPK. Leading up to the holiday break, artist Blane De St. Croix, interior designer Marissa Iacovoni, and Krayer himself all added their own talents and experiences into the melting pot. 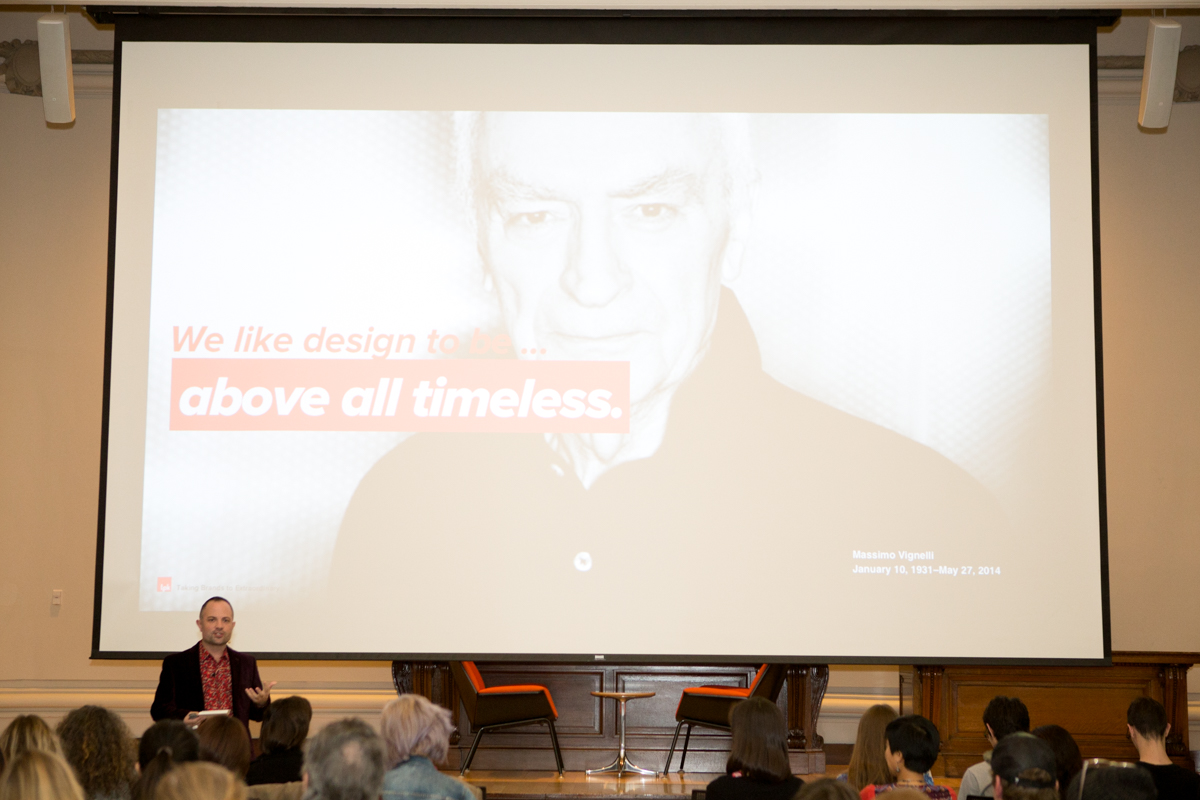 As Pop-Up Talks continue to grow and evolve, Krayer sees the format as the perfect compliment to the numerous visiting artists and guest speakers that are already brought onto campus by different programs.

“As with all of our professional interactions here, we want these talks to be an active exchange of ideas, not static lectures,” said Krayer. “We don’t want students to feel like it’s this obligatory thing they have to do for a grade; we want to give them experiences that ignite their passions and their creativity and help them realize the benefit of soaking up knowledge and experience from these immensely talented individuals who have already made the journey from student to professional themselves.”