The Art of Right Now, For 40 Years Running

Kendall College of Art and Design of Ferris State University (KCAD) is focused on nurturing the artists and designers of the future, and key to that mission is the Urban Institute for Contemporary Arts’ (UICA) focus on the art of right now.

(above): Local filmmakers (left to right) Dale Jackson, Nicholas Hartman (UICA Film Coordinator), Spencer Everhart, and Jackson Ezinga form the panel responsible for curating and facilitating discussion of work by up-and-coming filmmakers in West Michigan through UICA’s Open Projector Night events; (below): UICA sits in the heart of downtown Grand Rapids as the epicenter of contemporary art in the city

Its 40th anniversary exhibition, US IS THEM: Art from the Pizzuti Collection, was deeply rooted in the radical notion to connect current historical and cultural moments to a broader community within the city, featuring work from 42 international artists confronting issues of politics, religion, racism, and equity. Utilizing a yearlong approach to community collaboration in UICA’s content and programming, the resulting exhibition created a transformational moment for the city and a paradigm shift for UICA itself.

While UICA has changed over the years, it has always presented its audience with provocative and pertinent questions through its exhibitions and programing. UICA began as a 1970s grassroots initiative based on the need to provide a place where creative people could come together and express themselves.

Ronald Watson, one of UICA’s four founders and its first executive director, says the organization grew from a rising interest in public art spurred by the installation of “La Grande Vitesse,” the Calder stabile that was erected in 1969. “There was a lot of activity and interest in public art here in the ‘70s,” he explains. “That led to discussions with the women’s committee at GRAM and ultimately to our first exhibition, Sculpture Off the Pedestal, featuring work from several prominent U.S. artists who made or loaned work for public sites in Grand Rapids.”

That exhibition captured the attention of the community, generating more interest in contemporary art and creating a like-minded group of artists and volunteers. In 1977, the group officially became a nonprofit organization, setting up shop in an empty warehouse that it leased from the city for a dollar.

According to Watson, “The first audience was other artists. Everybody was young, and we were all pointed toward the future. UICA answered a real need, because…it also opened the doors for people to do new things and try new things, because there was a place to do them now.”

Operating on a shoestring budget, UICA jumped right into programming. “We were really pushing the edge in terms of artists being shown,” says Watson. “Our first show was Louise Nevelson prints, and in those days, that was a pretty big deal. Of course, we were making it up as we went, but we thought we were doing pretty damn well! There was still a lot of energy.”

With this auspicious origin and energetic momentum, UICA continued to bring not only exhibitions and programming of contemporary art, but also support for artists with the introduction of studio spaces and community programs. This drive and ambition propelled UICA through several decades and moves from the original site to the former electric company on Race Street, known as the Race Street Gallery, through to the purchase and renovation of its building on Sheldon Street in 1998.

“UICA was always very ambitious,” states former director Paul Wittenbraker. “It represented all the ideas that are hot today, like innovation, design thinking, interdisciplinary work, and reimagined community and culture.” One early project involved 24-hour video coverage of an artist who lived and worked in the building— a project that Wittenbraker says anticipated the live feeds of the 21st century and modeled a new use of media. “We knew when we were doing that, we were experiencing something from the future,” he says.

As with other urban, artist-run, community art organizations in the United States at this time, they drew on funding from national and regional arts-granting agencies, such as the Michigan Council for the Arts, the Arts Council of Greater Grand Rapids, and the National Endowment for the Arts. However, UICA is one of a very few of these grassroots art organizations that has had the resilience to persist, surviving funding model changes in the 1980s.

Interior designer Kathryn Chaplow was serving as a board member when the capital campaign for the Fulton Street building began, but the recession left the campaign incomplete. “We asked ourselves, ‘Are we going to close the doors, and if not, how do we keep them open?’ So we sought out a partnership and found one with KCAD.”

UICA officially merged with KCAD of Ferris State University in 2013, teaming with a group of community donors to generously pay off the building debt and complete construction of the upper floors. The merger preserved UICA for the community, while enriching students’ experiences with access to exhibitions of contemporary art by living artists, interactions with the college curriculum, and access to films and cultural events.

Looking back, Chaplow says, “The one thing that stands out is realizing that UICA is one of the facets of culture that is valued and supported by the whole community. It’s remarkable that we have a group that would come together to preserve this piece of the cultural landscape for Grand Rapids. It’s the only reason the organization is still open today.”

KCAD alumna Miranda Krajniak (’06, BFA Drawing) became interim, and then executive, director, during this process. Today, she says both the staff and the audience skew younger than previous iterations of UICA. “Every UICA has had a different vision of what UICA is,” she explains. “UICA can be anything.

In its current form, UICA hosts up to a dozen originally curated and traveling exhibitions a year, including visual and performance art, as well as lectures, musical performances, and educational programs. It also hosts independent, international, and documentary films six nights a week, along with regular Open Projector Nights for short films from Michigan filmmakers or those with ties to Michigan. What’s more, UICA’s Exit Space Project (ESP) provides support for street artists and public art, including colorful murals on highly visible “entry or exit spaces” to the city—a project that harkens back to UICA’s first public art exhibition.

As the organization turns 40 this year, Krajniak says her staff thought carefully about how best to commemorate the occasion. “We didn’t want to do a ‘greatest hits’ show, even though it would have been easy,” she says. “We’re about the present and the future, so we wanted to focus on something we hadn’t done well yet—and, historically, we have not done a good enough job bringing in communities of color.” 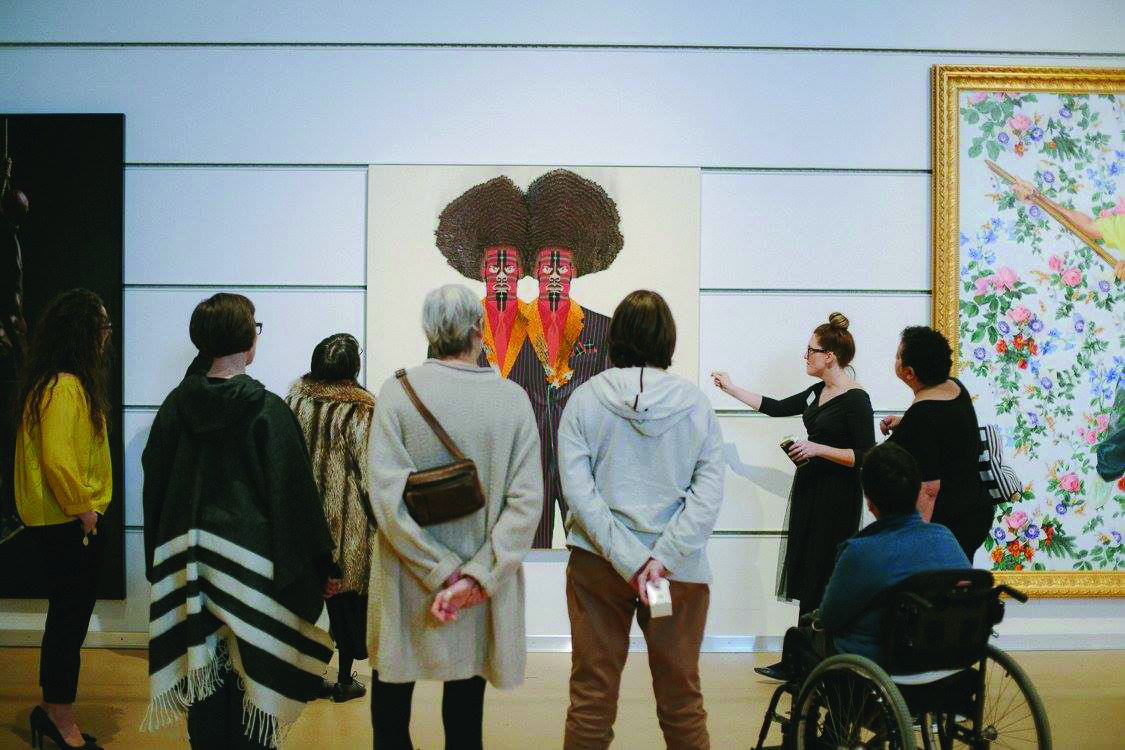 (above): Recent exhibitions Here + Now and US IS THEM connected viewers to powerful works confronting issues of politics, religion, and racism; (below): Artist Latesha Lipscomb (left) and UICA Executive Director Miranda Krajniak (right) at the opening reception for the US IS THEM and Here + Now exhibitions

Recent exhibitions did just that, with US IS THEM, in which international artists explored issues of social justice, solidarity, and tolerance between people from different cultures, and Here + Now, presenting work from emerging and mid-career African American visual artists, spoken word artists, curators, and performance artists, as well as community events and education programs. “We’re making a concerted effort to invite people in and make sure UICA is a community where they can see themselves reflected in a meaningful way,” says Krajniak.

From 1977 to 2017 and beyond, Wittenbraker says there will always be a place for independent organizations like UICA. “It’s essential that we have spaces where these activities of reimagining ways of living and being can take place in structured and unstructured ways,” he says. “Without them, those things can only take place in private spaces, which tend to be monocultural, or in commercial spaces, which, for all their fun, are not there with the public’s interest foremost in their minds.”

Chaplow adds, “What is radical [about UICA] is that it keeps moving forward. That’s what contemporary art does, and that’s why it remains exciting.”