The next year is shaping up to be a transformative one for Casey Newberg, thanks to one of the largest awards offered nationally to art students.

Newberg, who graduated from Kendall College of Art and Design of Ferris State University’s (KCAD’s) Allesee Metals and Jewelry Design program this May, has been announced as one of 10 recipients of the Center for Craft’s Windgate Fellowship for 2018. Fellowship Awardees are selected for their exemplary skill in craft, and receive $15,000 to further their artistic development in any way they chose. 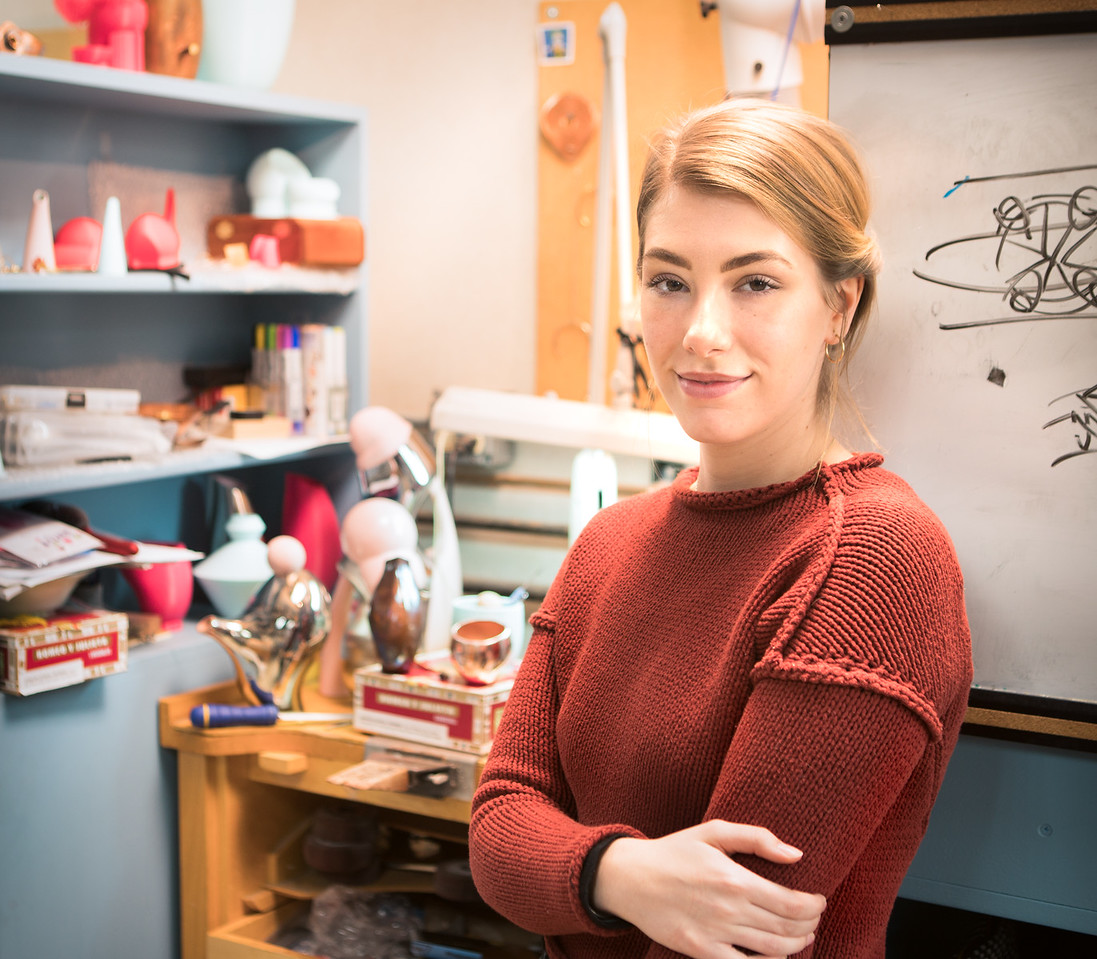 “The Windgate Fellowship provides critical financial support as a bridge between college and graduate school or life as a working artist,” said Center for Craft Executive Director Stephanie Moore. “It instills confidence and fosters bravery to take risks and the chance to seek and engage in career-enhancing opportunities.”

The 2018 awardees were chosen from a pool of 99 applicants by a panel of judges including Michael Coen, chair of the Museum of Arts and Design in New York City; Fabio J. Hernandez, the former executive director of the Society of Arts + Crafts in Boston; Mia Hall, the Executive Director of the Penland School of Crafts in Penland, North Carolina; and John Souter, a visual artist and 2012 Windgate Fellowship recipient.

“Casey is part of the future of craft, design, and art in America,” says Allesee Metals and Jewelry Design Program Chair Phil Renato. “She is one of those rare students who can combine innovative material and process selection, a strong visual vocabulary, and an interest in channeling ideas from a broad spectrum of influences into objects that are advanced yet believable. She easily gained competence in the basic formats of our field, but has thrived as she pushed herself to master things that few around her could understand or help her with.”

To Newberg, who also received the Metals and Jewelry Design program’s Excellence Award for 2018, the fellowship is a validation of the exploratory approach she’s practiced throughout her time at KCAD.

“This is a huge deal for me. It’s amazing and humbling to realize that people believe in what I’m doing and want to support me,” she says. “The award will give me the freedom to keep pursuing new possibilities with my work, and it will allow me to travel and learn about what other people are doing, how they’re doing it, and how I can bring that all back into my own creative practice.”

As of late, Newberg has been experimenting with creating cups, pitchers, and other vessels using electroforming—a process in which an electrolytic bath is used to deposit electroformable metals like nickel or copper onto a conductive surface, such as stainless steel, that acts as a mold— as well as 3D printing. 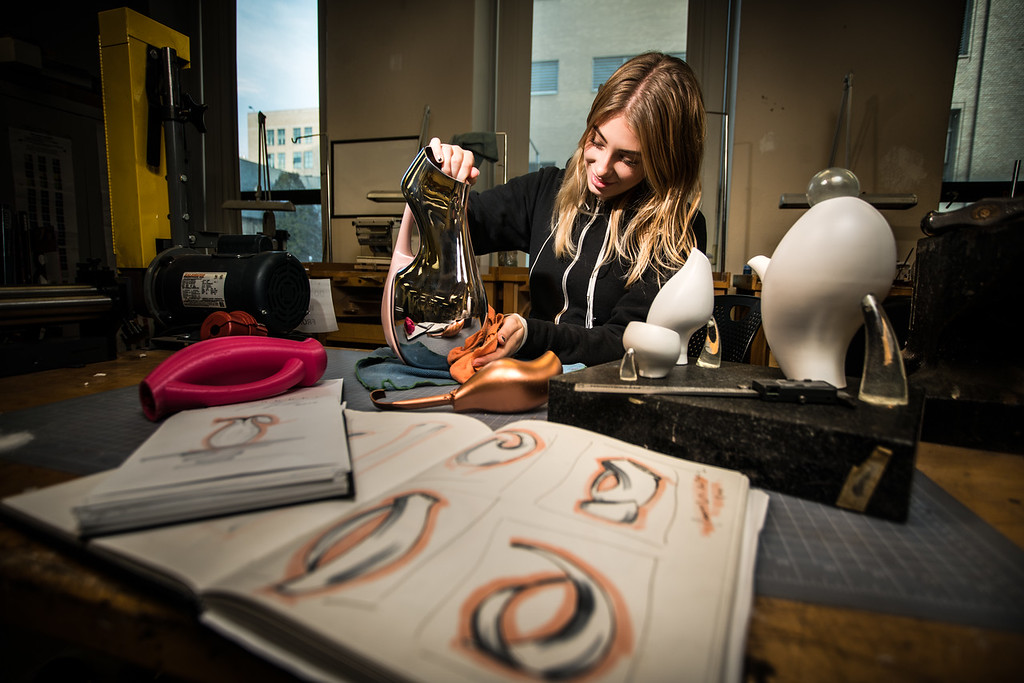 Newberg polishing a finished piece in her studio

“Electroforming is a highly technical process, but it’s fairly old and it hasn’t really been pushed into the 21st century,” Newberg explains. “I want to change that.”

She begins by making a digital model of the shape she wants, then 3D prints the model and figures out which aspects of the vessel can be created using electroforming. The finished product blends the electroformed metal with handles and or accents that have been 3D printed in plastic.

Newberg’s focus on vessel-making stems from her desire to create visually-striking objects with everyday functionality.

“I studied for a long time as a jeweler, so I’m pulled strongly toward things that we interact with all the time,” she says. “It’s an interesting relationship between form and function. The appearance of these vessels is very conceptual—my inspiration is coming heavily from femininity and pregnancy—but everything I’ve designed is made to hold liquid.” 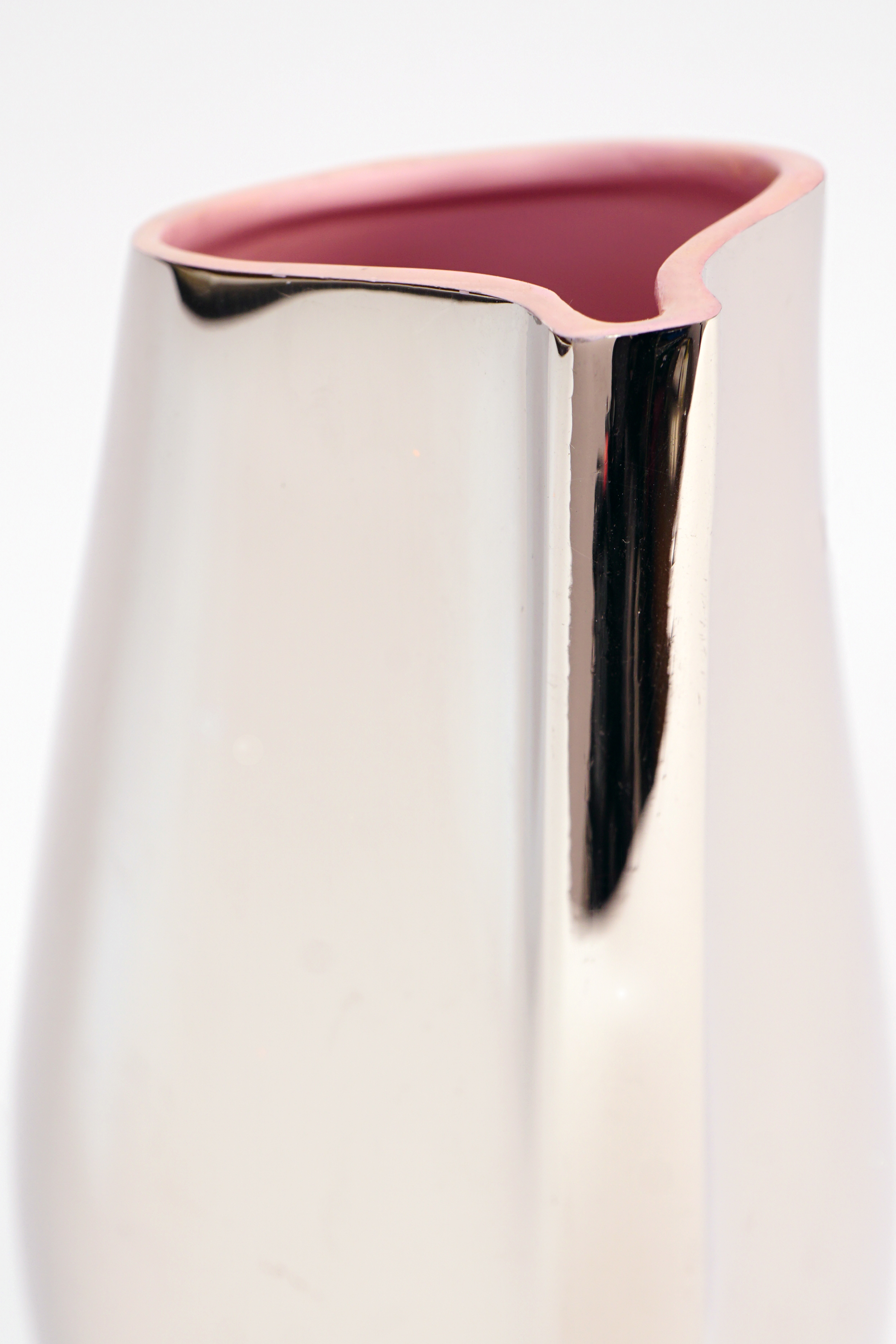 “Large Creamer” by Casey Newburg (image courtesy of the artist)

“I just really like plastic for its versatility; I don’t want my pieces to look too traditional,” she says. “Coating the plastic pieces with automotive paint gives me the choice to polish them or leave them matte, and that offers a lot of options in terms of the end look of the product.”

“Birth” by Casey Newberg (image courtesy of the artist)

Materials, processes, and techniques aren’t the only drivers of Newberg’s artistic development. She credits her faulty mentors, Renato in particular, for kindling her curiosity and helping her realize her vision.

“Coming to KCAD was the best thing that ever happened to me,” says Newberg. “No matter what crazy ideas I have, Phil has always had an attitude of ‘whatever you want to do, we’ll figure out how. Let’s make it.’”

A minor in Art History stoked Newberg’s interest in feminine imagery from the Renaissance, a major influence on her work. Professor and Art History Program Chair Anne Norcross introduced her to different artworks, theories, and conceptual backings that have pushed her work into the theory base it’s at today

“Feminine figures in Renaissance paintings are fuller and very curvy, not like what we see today—that imagery is, aesthetically, everything to my work,” she says. “I probably would have never engaged with it without my art history classes.”

Newberg plans to use her Windgate Fellowship award to visit the University of Iowa, which she says has one of the nation’s premier electroforming setups. She’d also like to travel to the Netherlands for Dutch Design Week in Eindhoven. In addition to traveling, she plans to continue honing her electroforming skills in her personal studio, share her findings through writing and workshops, and organize and exhibition focused on young women and silversmithing.

“I want to focus on this stuff so much; having the time to be able to do that and to build on what I’ve begun at KCAD is very exciting,” says Newberg. “I can’t wait to see where my work will go.”