Pathways is the name of KCAD s model for general education courses. It s based on the understanding that the most successful artists, designers, art historians, and art educators are those who stay broadly and endlessly interested in the world around them. That s why KCAD s Pathways model gives you the freedom to pursue an education that sparks your curiosity and stimulates your creativity. Wherever your exploration leads, you ll emerge as a critical and analytical thinker who can both adapt to change and chart new, creative paths forward.

How does the Pathways model work?

The Pathways model blends 30 credits of broad, integrative study with a deep dive into a focus area of your choice. First, you ll take five foundational courses (15 credits) Writing, Intro to Narrative Studies, Intro to Cultural Studies, Intro to Philosophy, and a Math or Science Elective* that will set the stage for you to immerse yourself in your interests. You ll then select one of three pathways in which you ll take four classes (12 credits) in an area of focus. Each pathway culminates in a capstone course (3 credits) that encourages you to make powerful connections between all that you ve learned and experienced along the way. 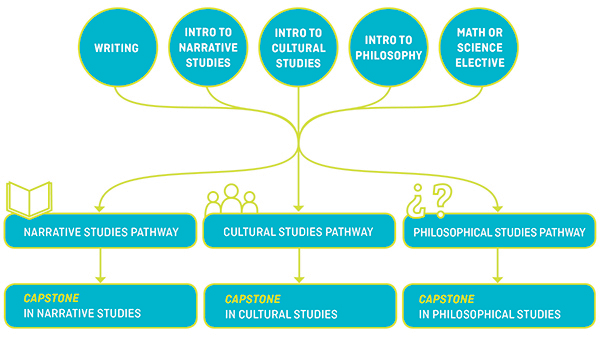 Which Pathway is right for me?

is about stories. It s for people who like to read and write fans of novels, comics, and films. Engagement in narrative studies enables students to analyze characters and examine what drives them as they fight to overcome obstacles. If you choose this pathway, you ll examine important texts, compose your own ideas through writing, and form critical insights into your own world. Courses in this pathway include creative writing, world literature, film, and genre studies, among others.

Courses in the Narrative Studies Pathway:

is about identity. It s for students who want to understand how societies work and who want to see change in the world around them. This path of study explores how individuals shape and are shaped by society, exploring the constructions of race, class, gender, sexuality, ability, and citizenship. Along this pathway, you ll grapple with social change and systems of power, analyzing how your identity is related to larger cultural practices and institutional structures. Such experiences occur in a wide range of social sciences classes, including history, political science, gender studies, and sociology.

Courses in the Cultural Studies Pathway:

is about big questions: What is real? What is good? What is beautiful? The discipline of philosophy teaches you not what to think but how to think and in more informed, consistent, and rational ways. Philosophy encourages inquiry into life s fundamental questions, with the ultimate goal of bringing into focus essential issues about who we are and why we re here. Students encounter these issues not only in philosophy courses but also in classes such as world religions, aesthetics, and mythology, among others.

Courses in the Philosophical Studies Pathway:

How will my existing credits transfer into the Pathways model?

We understand that you may already have taken some courses in the areas of general education (i.e., the humanities, social sciences, math, and/or sciences). Rest assured that we will work with you to transfer in as many of those courses as possible while still helping you to reap the benefits of KCAD s unique Pathways experience.

For more detail information on how specific classes may transfer, please visit our Transfer Credit page.